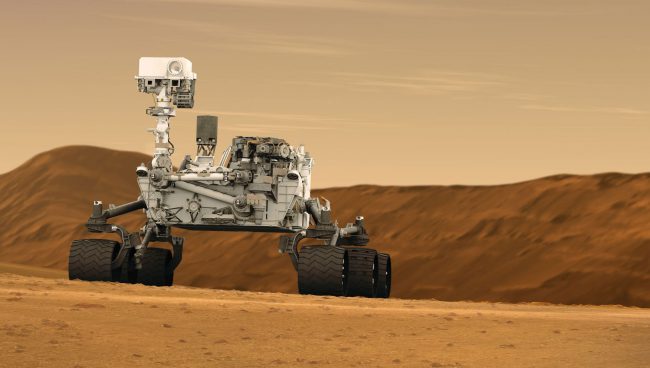 Martian scientific laboratory NASA called Curiosity faith and truth has served the benefit of terrestrial science for almost five years. During this time, the rover has made an impressive journey of more than 15,000 meters along the surface of the Red Planet. The process of moving was extremely slow, because sometimes the connection simply broke off and scientists had to wait for Curiosity to contact again. The NASA leadership took a very unusual step: they decided to give the rover an artificial intelligence so that it could move on the surface of Mars independently, even when there is no connection with the Earth.

In 2015, engineers of the US space agency NASA loaded on Curiosity a new firmware, making it more autonomous in a foreign planet. This system is called AEGIS (Autonomous Exploration for Gathering Increased Science). Scientists for a long time corrected numerous errors in the code so that the rover eventually could independently continue its journey without constant control from the surface of the Earth. The AEGIS system is not capable of carrying out serious research missions and is responsible mainly for moving the rover in the absence of communication with the Earth. The remaining manipulations continue to be performed by operators from the Earth.

But there is one more ability that the rover found together with artificial intelligence AEGIS. It is an opportunity to independently choose the Martian stones for conducting experiments on them. Mars rover cameras scan the environment and select the most suitable rocks in order to then evaporate them with a laser, and then examine the gas released from them. The system of automatic rover migration was tested for almost two years during short stretches of the path, when Curiosity gave full freedom of action. The effectiveness of the artificial intelligence pleasantly pleased scientists. The system lived up to its expectations and allowed researchers to save time and effort. The obtained research data will be used in the software of the next Martian rover, which will be sent to the Red Planet in 2020.