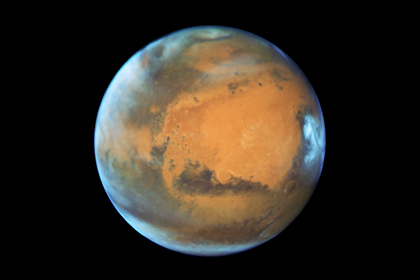 American geophysicists have shown that the Martian satellites are most likely formed from ring systems, which after a while are destroyed and turn into moons. Scientists have counted several such transformations in the history of Mars.

It is known that Phobos, one of the two satellites of Mars, in about 70 million years, will come so close to the planet that it will be destroyed by tidal forces. A computer simulation conducted by scientists showed that approximately 80 percent of Phobos’ matter will fall on Mars, while the remaining 20 percent around the planet will form a ring. With the passage of time new satellites are formed from it. According to scientists, such processes have occurred repeatedly throughout the history of Mars.

Scientists conducted simulations allowed to explain the origin of Phobos and Deimos – the second satellite of Mars. It is likely that the moons formed when the ring system around Mars arose for the third to seventh times during the last 4.3 billion years.

The authors note that, probably, a number of anomalous deposits on the surface of Mars can be explained by the fall of matter from ring systems to the planet.