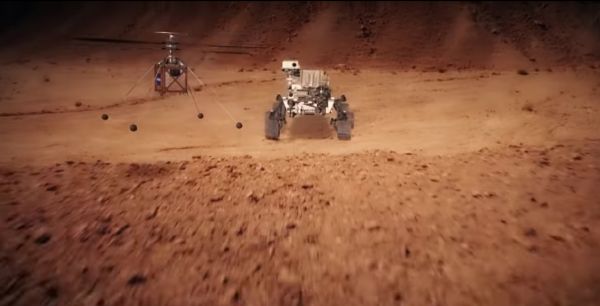 The moons of Mars do not look like earthly ones. The orbit of the largest satellite of the Red Planet – Phobos – is much closer to its surface. If the Moon takes 27 days to orbit the Earth, then Phobos makes three revolutions around Mars in one Martian day (sol).

Therefore, solar eclipses on Mars occur much more often than we do. True, Phobos, due to its size, never completely covers the Sun, and the average Martian eclipse lasts no longer than 30 seconds. However, even such a short period of time was enough for the InSight apparatus to record interesting phenomena on the planet.

To the surprise of scientists, during the Phobos eclipse, a seismometer was activated on the device, which should register tectonic activity on Mars. “During a solar eclipse on Earth, equipment can detect changes in temperature and gusts of wind when the air is cooled in a specific location,” explained seismologist Simon Stachler of the Swiss Higher Technical School of Zurich (ETH Zurich). At the same time, InSight did not notice any atmospheric changes on Mars during the movements of Phobos. All indicators remained at the usual level.

Only solar panels recorded the fall in radiation, which is not surprising. Nobody expected that the seismometer, as well as the magnetometer, would work. “We did not expect readings from a seismometer, this is an unusual signal,” Stahler said. – Imagine a coin, put two silver atoms under one edge. This deviation that we are talking about is 10 to minus 8 degrees. ”

The signal turned out to be weak, but real, it cannot be called false positive. In addition, it has no resemblance to the planet’s previous seismic activity, that is, it cannot be attributed to the gravitational effect of Phobos.

One of the most probable reasons for the seismometer’s operation could be the cooling of the surface of Mars after the protracted passage of Phobos, which was followed by a one and a half minute period of heating the earth to its previous temperature. This is confirmed by data from an infrared radiometer. A series of experiments with artificial heat sources has shown that seismometers react almost instantly to temperature changes.