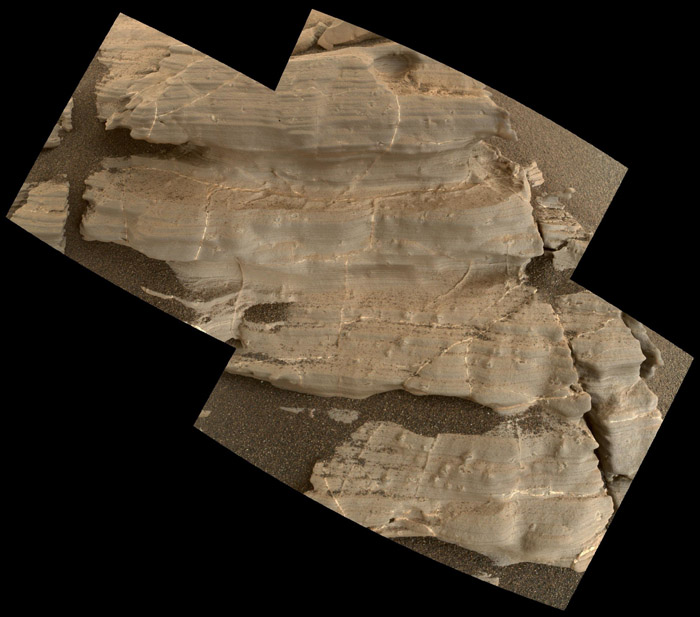 Tiny convexities in the form of a star and butterfly wings, observed in the layered underlying rock of the Martian mountain ridge, have been thoroughly studied using NASA’s Martian NASA Curiosity.

These forms of crystals are well known to geologists studying gypsum crystals formed in drying lakes on Earth, however the Curiosity rover team also considers alternative versions of the origin of these crystals found in a place called the crest of Vera Rubin y in the lower part of Mount Sharp located inside the Gale crater.

One of the uncertainties that can be resolved as a result of the analysis relates to the determination of the formation time of these crystals with respect to the time of accumulation of layers of sedimentary material around them. Secondly, the scientist does not know yet whether the raw material that crystallizes into the coalescences of this form remains as part of these intergrowths, or whether it was subsequently dissolved by groundwater and replaced by other material. The answers to these questions can be confirmed by the version about the existence of a drying lake or groundwater flowing through the sedimentary rocks, until they were censored, turning into stone.

In addition, the rover team is studying other materials located in the same area of ​​the surface of the Red Planet, which can help to better understand the history of Mars. This includes small formations, similar in shape and size to rice grains; Mineral veins with alternating bright and dark zones; changes in the color of the underlying rock; smooth horizontal stratification at which the thickness of one layer can exceed the thickness of another by almost 10 times, and also the change in the content of iron in different samples of rocks investigated by the rover is more than 4-fold.