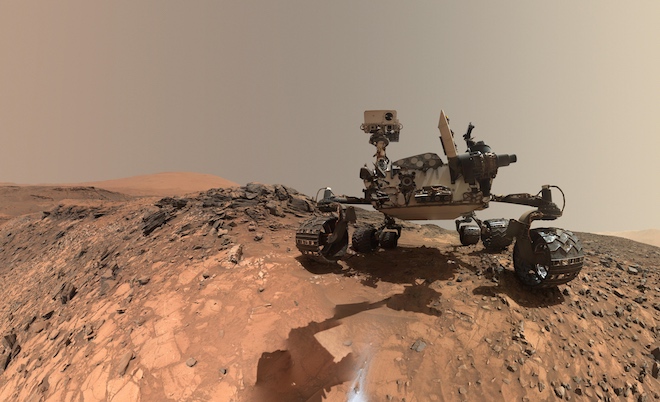 Mars Rover “Kyuriositi” found on the red planet tridymite. This kremnezema the material to be Ground is formed when hot volcanic lava comes into contact with ocean water. Rover found tridymite in the Gale crater, which is considered the bed of an ancient lake. On Earth this material occurs after powerful volcanic eruptions.

NASA scientist Richard Morris admitted that he was shocked by the discovery. Nobody even thought that on Mars there can be conditions for the formation of tridymite. Although the red planet has volcanoes, and they are all basaltic, as the volcanoes in Hawaii. These volcanoes emit lava, rich in iron and magnesium but low silicon content.

Volcanoes in the Cascade mountains in the canadian province of British Columbia and on the Pacific coast of the United States — quite another matter. The so-called silicic volcanoes are formed when the plates of Juan de Fuca in the Pacific ocean is pushed under the continental North American plate, taking a lot of ocean water. As a result, says Morris, the lava in the volcanoes of the Cascade mountains contain a lot of silica — a mineral which is formed in the presence of water. Very high temperature allows silicon to melt and perekristallizatsii in tridymite.

“There is no evidence of the movement of tectonic plates on Mars,” says Morris. — That’s why the discovery of tridymite was such a surprise.” Also on the red planet there is no trace of silicic volcanoes, and there is no evidence that Mars had enough water, which could interact with the lava.

But the discovery “Curiosity” mineral — definitely tridymite. “There is absolutely no doubt,” says Morris. Tools of the Rover not only identified the chemical composition of the material, but also scanned the rock with x-rays.

“I never expected to find tridymite in the Gale crater on Mars”, says Ralf Gellert of the University of Guelph (Canada). The scientist added that the rocks in Gale crater in General have a high level of silicon compared to the rest of Mars. Some boulders from the crater is very similar to the stones that are on the mount St. Helens on Earth.

“Curiosity” will continue to explore the rock climbing on the multilayer hill called mount sharp. The researchers want to test if the Rover is still tridymite on the way up.