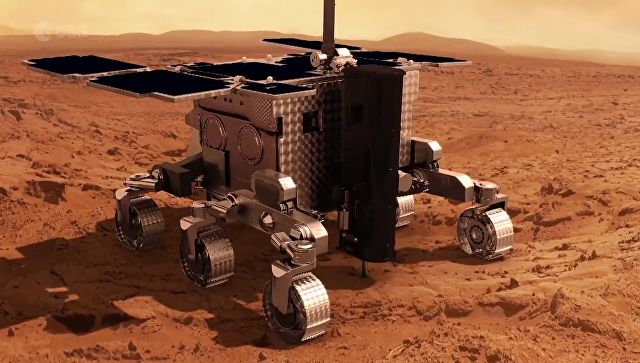 The engineering teams of NASA and ESA have completed the assembly of the unique MOMA laboratory that will work aboard the European Pasteur rover and search for traces of extraterrestrial life on Mars, the Goddard Space Flight Center of NASA.

“The rover rover will allow us to obtain rock samples from a depth of up to two meters.In these ancient breeds of Mars can hide organic compounds and other traces of life that could exist on the red planet in the distant past,” said Will Brinckerhoff, project manager MOMA from NASA.

In the spring of 2012, the European Space Agency and Roscosmos agreed to jointly implement the ExoMars program. The project consists of two parts – the probe Trace Gas Orbiter (TGO) and the rover, equipped with a number of Russian scientific instruments.

The first device was sent to Mars in March 2016 with the help of the Russian Proton rocket, and the second – sits on the surface of Mars with the help of a special landing system, created in the NGO them. Lavochkin. The mission of the rover is geological research and search for traces of life near the landing site, and the probe will study the traces of rare substances in the atmosphere of Mars and search for deposits of water ice.

Both the platform and the rover will be equipped with both European and Russian scientific instruments intended for geological and chemical research. One of such instruments will be a soil chemical analyzer, developed by a group of scientists from Moscow State University, Institute of International Relations and MISIS under the leadership of Oleg Korablev from the Space Research Institute of the Russian Academy of Sciences.

The MOMA laboratory, the largest scientific component of Pasteur equipped with several spectrometers and chromatographs, will play a similar role from the European and American sides. It was developed at the Institute for the Study of the Solar System in Göttingen (Germany), with the assistance of NASA and ESA.

The key part of this device is a miniature mass spectrometer with the help of which scientists hope for the first time to accurately study the chemical composition of the most ancient samples of Martian soil and understand what organic molecules are contained in it. To do this, Pasteur will heat the soil samples in a special “furnace” and fire them with a laser, forcing these substances to leave the ground and pass through a mass spectrometer.

Unlike all other chemical laboratories working on satellites and other rovers today, MOMA will be able to determine the direction in which the molecules passed through it are “twisted”. This turns it into a real “life detector”, since all molecules of amino acids in living organisms, as well as sugar, are turned only to the left or right side.

As the scientists hope, the two-meter-long Mars rover and MOMA will help to find not only potential traces of ancient life on Mars, but also “living” microbes that can hide a few meters below the surface where cosmic particles and solar ultraviolet do not penetrate, and where liquid water may be present.