Mars, the “shelled” fraction of meteorites 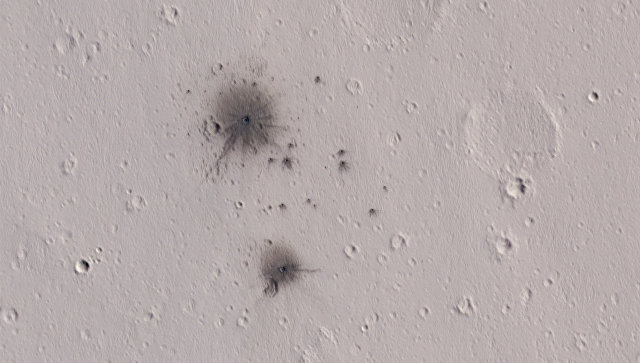 The probe MRO took photos of the unusual track of the recent falls of meteorites on the surface of Mars, similar to the marks from the shots of a giant space shotgun, the website of the HiRISE instrument.

Mars, unlike Earth, Venus, and several moons of the giant planets, deprived of the thick atmosphere, that the surface can almost freely bombardirovschika even relatively small asteroids and meteorites. From a scientific point of view, this feature of Mars is probably a plus, as it allows you to determine the age of different regions, based on data on erosion craters and their total number.

Relatively recently, about ten years ago on the surface of Mars, as shown by images from the probe MRO, there was a group of unusual craters, whose appearance is very similar to the traces from the shot the planet with a shotgun. Photos of these traces were obtained by probe by camera CTX and its “big brother” HiRISE is capable to distinguish on Mars structure of the size of about a meter.

Scientists believe that the meteorite that produced the crater in 2008-2012, consisted of loose rock. It broke into several pieces when entering the atmosphere of Mars. In the result, there was a dense space charge “of buckshot”, which hit the region of Tharsis near the equator of the red planet, moving at very high speed from the southern hemisphere of Mars.