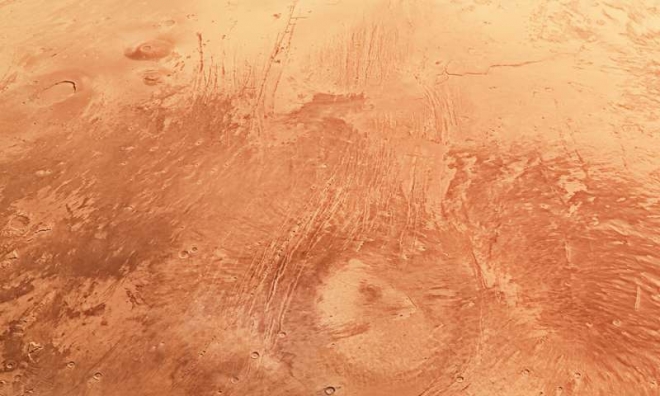 How to understand in space, where is the upper, and where is the bottom? If we talk about planets, then from above we usually see the North Pole, and from the bottom – the South Pole. But in this unique image, obtained by ESA probe “Mars-Express”, the Red Planet is shown from the perspective of the North Pole, over which the equator is stretched.

The picture was taken on June 19 to calibrate the stereo camera when the Mars Express was flying from north to south. Nine camera channels – one lower-directional, four color and four stereo – panned above the surface to record a large area with the same lighting conditions. At the same time, the camera was shifted to the horizon.

The result was a rare wide-angle image of a planet with an illuminated horizon near the equator at the top of the image and a shaded North Pole at the bottom.

At the beginning of spring, when the picture was taken, the northern polar cap consisted of water ice and dust. Carbon dioxide, which is present in solid form in winter, has already evaporated. Similarly, water ice evaporates, releasing a large amount of water into the atmosphere, which circulates in the south due to atmospheric currents. With the return of the cold seasons everything again freezes.

Panorama with a view to the south shows Martian volcanoes in the Tarsis region. The area of ​​this region is larger than the whole of Europe, and the average height is 5 km. The volcanoes rise 10-22 km.

The largest volcanic giant “Mount Olympus” remained behind the scenes, giving way to the volcano “Mount Alba” with a diameter of more than 1000 km, which is located in the center of the upper half of the image.

Around this mountain on the edge of Tarsis one can see a series of parallel lines, the formation of which is associated with tectonic tensions. As the region accumulated magma in the first billions of years of the planet’s history, the crust was stretched. Later, when the subsurface magmatic chambers were emptied, subsidence of the earth’s crust also gave rise to cracks.

Further to the horizon is a 15-kilometer volcano “Mountain of Ascrya”, covered with foggy clouds. To the left of it you can see the “Mountain of Uranus”, “Keravan Dome” and “Dome of Farsida”.

Despite the average, according to Martian standards, the size (60-150 km in diameter and 5-8 km in height), they constitute a competition to many terrestrial volcanoes. Mauna Kea – the highest volcano on Earth – rises 10 km, if measured from its oceanic base to the summit, and only 4200 m above sea level.