Mars volcanoes could be home to germs 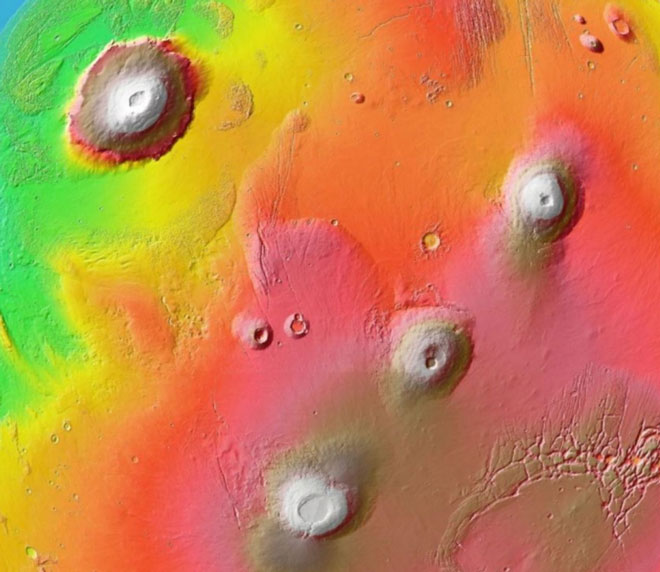 Once upon a time, Mars was an amazing planet. Billions of years ago it was a place with huge volcanoes, a giant canyon system and branched river valleys.

However, planetologists have discovered that, probably, some volcanoes have formed relatively recently from a geological point of view. And the most exciting hypothesis related to the discovery – they could provide an ideal environment for living microbial life forms.

Mount Olympus on Mars is the largest volcano in the solar system. Its height is 22 km, and the foot is more than 500 km wide. Olympus began to form more than 3 billion years ago, but some solidified lava flows are high on its slopes for only 2 million years. To this conclusion, scientists came because of the absence of impact craters on these sites. Craters formed by impacts of asteroids show how old the surface is. The more craters, the more years this or that site. However, the fresh lava of the volcano can bury the craters, dropping the counter of years to zero. There is an opinion that Olympus and its neighbors-volcanoes have not died out. Perhaps they will throw out the lava in the future, although they will have to wait several million or billions of years.

But is the formation of volcanoes on Mars now? Where are the youngest volcanoes that awoke to life recently?

Researchers noticed various concentrations of small young cones – symmetrical hills with crater tops, but a single version of their origin was not put forward. They could be places of real volcanic eruptions, but they could also be mud volcanoes formed by jets of underground mud, or rootless cones formed by explosions of lava flowing over wet or icy ground. 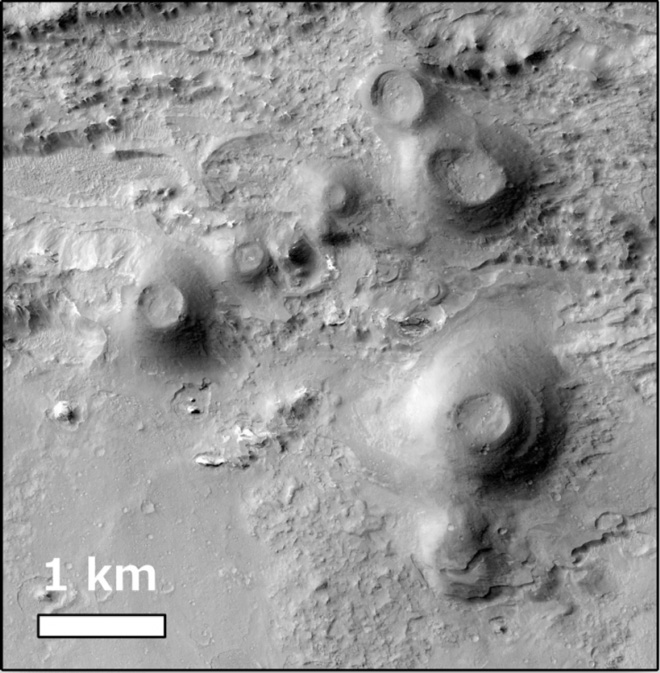 The study of the Czech-German-American team led by Peter Brozha is proof that at least some of them are true volcanoes. Brozh and his team studied cones in Coprat canyon, the deepest part of the canyon system of the Mariner Valley. It is quite far from the main volcanic regions of Mars, and it is assumed that magma erupted from ancient, but renewed cracks in the canyon system.

Researchers are convinced that these are real volcanic cones, similar to ordinary terrestrial volcanoes, known as slag and tuff cones. The scientists came to this conclusion by studying the shallow layers on the inner side of the crater walls in the images of the HiRISE camera of the Mars Reconnaissance Orbiter. It can be seen that the cones consist of layers similar to layers of tuff cones on the Earth.

Cones are too small to determine their age, counting shock craters, but dating on the craters of the surrounding soil (which is most likely the same age) has shown that it is 200-400 million years old. On our planet such cones are created for one eruption (which can last for weeks or months), so this date almost exactly coincides with the date of birth of these small volcanoes.
Cones could form during the explosive eruption of lava bunches from the size of grain to brick.

A jet of lava beat from the central crater, as a result of which the cone grew layer by layer until it reached its final height.

The results of this study are amazing for a number of reasons. Such a young volcanism on Mars suggests that the planet still has some volcanic activity and volcanos can form.

While the team learned the composition of only one of the cones, using the camera “Mars Reconessance Orbiter.” It contains a mineral called opaline silica, as well as sulfate minerals. This means that the hot rock before or after the eruption reacted with the Martian groundwater.

If so, then on each volcano there could be a mixture of water, heat and chemical energy, suitable for microbes, similar to that inhabited by hot springs on Earth.

Given that the cones are at least 200 million years old, they are unlikely to sustain life today. But they can become excellent sites for searching fossilized microbes with minimal risk of infection of an active ecosystem.