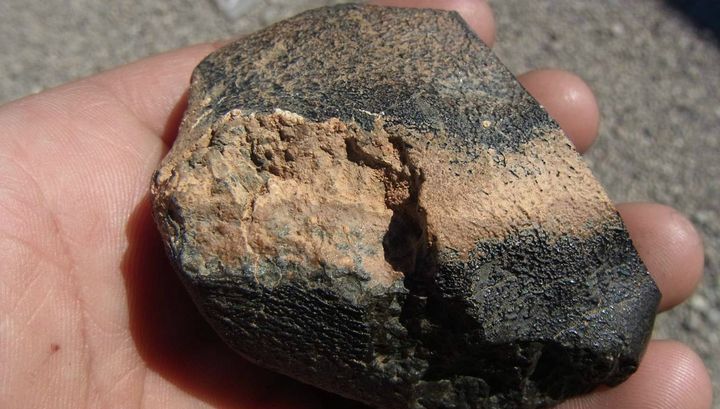 The most powerful volcanoes on the planet – just a sneeze compared to the volcanic activity on Mars. This statement was made by a team of researchers from the universities of Houston and Purdue, studied the meteorite NWA 7635 (or “Northwest Africa” 7635).

The name of the Martian meteorite received, as was found in 2012 in Algeria. It fits in the palm and weighs only 200 grams. Humble visitor from the red planet, however, helped scientists to make a very loud opening.

Of the more than one hundred Martian meteorites found today over the Earth (mainly Antarctica or North Africa), the researchers studied about 30 using isotopic geochronometers that helped to divide meteorites into groups according to their age.

It turned out that only ten of the meteorites belong to the same group as found in Africa. The analysis showed that the meteorite consists mainly of shergottite Martian volcanic element.

“We see that they all evolved from a single volcanic source. Taking into account the fact that all of them have a single time of the eruption, we can assume that they all occurred from the same locations on Mars,” explains the origin of the group of meteorites Professor Thomas Lapen (Thomas Lapen).

But the most interesting meteorite landed in Algeria, much older than the rest of the “relatives”. The age of the other investigated Martian shergottites is from 327 to 600 million years, they were all thrown from the red planet about 1.1 million years ago. However, NWA 7635 is clearly formed much earlier – at least 2.4 billion years ago. That is, the Martian volcanoes were and, moreover, erupted at that time, making them the most long-lived in the Solar system.

“This means that for two billion years in one place on the surface of Mars was sort of a steady plume of magma. Here on Earth there is nothing like that would remain stable for a time in a certain place,” — said in a press release, co-author with mark Caffey (Marc Caffee).

Researchers are not yet sure in what volcano are shergottite, but the most logical I think the version that they are thrown out during the eruption of mount Olympus – today an extinct giant volcano, which is the second highest mountain in the Solar system.