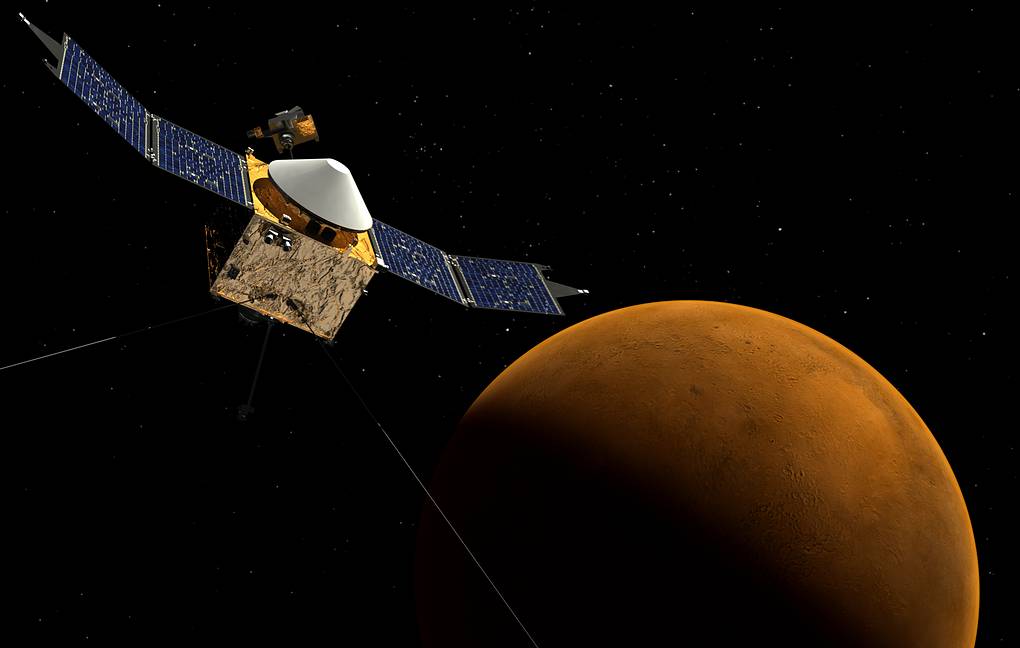 Having studied the data of the interplanetary station MAVEN, planetary scientists concluded that almost all of the reserves of Martian water escaped into space directly, rising from the upper atmosphere. Previously, scientists assumed that water first disintegrated into hydrogen molecules, and only then these molecules escaped into space. An article describing the study was published in the scientific journal Science.

“In the past, few believed that water could in principle exist in the upper atmosphere of Mars. Our calculations show that over the past billion years, this part of the planet’s air envelope has lost as much water as it would have been enough to cover its surface with an ocean of 44 cm. Mars lost another 17 cm of water due to dust storms, “the researchers write.

Over the past ten years, planetary scientists have uncovered ample evidence that rivers, lakes and entire oceans of fresh water once existed on the surface of Mars. Theoretically, in such water life of the terrestrial type could arise.

Scientists believe that there was about the same amount of water on Mars as in the Arctic Ocean. Moreover, there would be enough water on young Mars to cover its surface with a layer of moisture 140 meters thick. However, where she disappeared and when she appeared on the surface of the Red Planet, scientists still cannot say for sure.

Most planetary scientists assume that nearly all of Martian water has escaped into space. This is due to both the small size of Mars and the fact that it does not have a powerful magnetic field, similar to that of Earth. How exactly this process took place is not yet known. This puzzle is now being solved by two space missions at once – the Russian-European probe “ExoMars-TGO” and the American spacecraft MAVEN.

The mystery of the missing oceans of Mars

In the new work, planetary scientists under the leadership of the director of the department for the study of the solar system at the NASA Space Flight Center. Goddard (USA) Paul Mahaffy obtained the first data on how water from the atmosphere of Mars escaped into space during the last billion years of its Mars history. To find out, the researchers looked at the data collected by the MAVEN probe.

Astronomers were interested in two things – how many water vapor and molecules similar to it are in the upper and lower layers of the atmosphere of Mars in different seasons, and also whether their amount correlates with the concentration of molecular hydrogen in the atmosphere.

The fact is that, according to scientists, in the atmosphere of Mars at an altitude of 50-60 kilometers and above, where the so-called “hygropause” is located, there cannot be any significant amounts of pure water.

Therefore, astronomers assumed that water escapes from the atmosphere of Mars into space not directly, but due to the fact that its molecules decay, as a result of which neutral hydrogen decays. Its molecules can calmly overcome the hygropause and rise to the upper atmosphere, where they can be carried into space by the solar wind.

Mahaffi and his colleagues have verified whether this is actually the case. Using the instruments of the MAVEN probe, they calculated the position of the hygropause and the typical amount of water on either side. It turned out that the hygropause was not at all impervious to water vapor.

The probe’s data shows that water is in the upper atmosphere of Mars throughout the year. In the upper atmosphere, its concentration sharply increased in the summer in the southern hemisphere of Mars and during powerful dust storms. However, planetary scientists did not record similar fluctuations in the concentration of hydrogen in the lower layers of the atmosphere, which are located at a great distance from the hygropause.

All this, according to Mahaffi and his colleagues, indicates that the water of Mars escapes into space mainly directly, rising to the upper layers of its atmosphere and interacting there with cosmic rays and the solar wind. Further observations of the atmosphere of Mars and the study of its surface using rovers, scientists hope, will help them understand when this process began.