Mercury in the past has been turned inside out 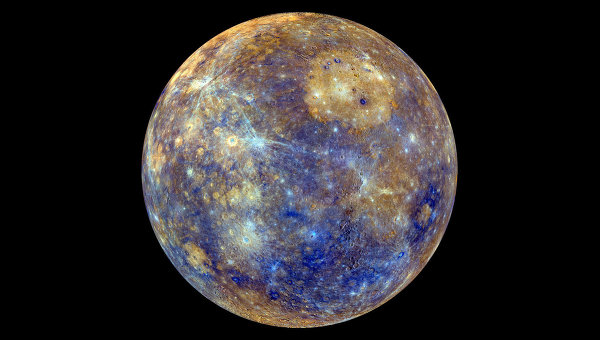 The unusual “speckled” nature of the mercury from the point of view of its chemical composition found a simple explanation – it turned out that the planet is actually inside-out because of rocks from the boundary between the mantle and the core was on its surface, planetary scientists said at a conference of geophysicists in Yokohama.

“Mercury is a unique rocky planet. Unlike Earth, it has a large core and a relatively thin mantle, this means that the border between them is at a depth of only 400 kilometers from the planet’s surface. We found that the more ancient regions of mercury are composed of rocks, who was born at high pressures at the boundary between the mantle and the core, while the younger zone of the minerals are born of the planet’s surface,” said Asmaa Mujibur (Asmaa Boujibar) from space flight Center of NASA’s Johnson (USA).

Mujibar and her colleagues have uncovered this unusual secret first planet of the Solar system, studying the geological data collected by the MESSENGER probe during its operation in orbit of mercury.

According to her, one of the major surprises, open this interplanetary station, was the fact that the surface of mercury is a mosaic of very diverse minerals, the combination of which until the arrival of the MESSENGER was considered impossible. Furthermore, were discovered some oddities of the terrain, such as slopes lobed, pointing to the impossible high speed compression of the bowels of the planet, and other things that it was almost impossible or really impossible to explain.

Geologists from NASA under the leadership Mujibur believe that they managed to find an explanation for all that weirdness, including to uncover the reason why mercury is “hell” a planet with a high proportion of sulfur in the rocks, trying to recreate his matter in the laboratory.

Today scientists believe that mercury was “made” from a small protoplanetary bodies, identical in composition to the so-called chondrites-enstatite, asteroids with a high content of alkaline rocks. Using a mixture of these minerals, scientists have compressed it to 50 thousand atmospheres and heated to several thousand degrees, and then studied what the breed originated.

Studying this “mini-mercury has led to a relatively unexpected results – it turned out that the most ancient rocks on this mercury were identical in composition and properties to those layers offspring Mujibar and her colleagues, which occurred at the boundary between the core and the mantle.

This means that mercury was, figuratively speaking, turned inside out in the first era of his life when his bowels are not yet fully frozen – breed from the “bottom” of the mantle rose to the surface and was thrown out during the powerful volcanic eruptions. A similar origin of the surface rocks makes mercury even more unique than previously thought, the scientists conclude.