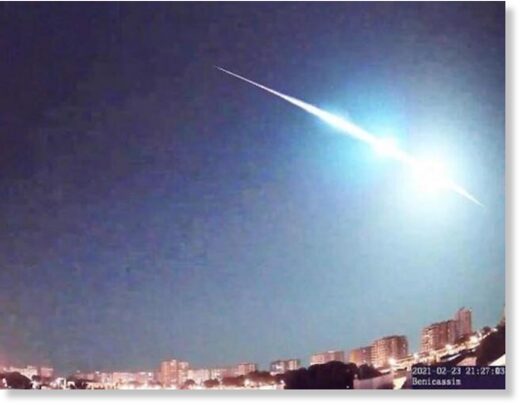 At about 9:30 pm on Tuesday, the “fireball” crossed the Mallorcan sky, and eyewitnesses who saw it in the midst of the Serra de Tramuntana, Dea and Soller mountains said that it was moving in a trajectory from north or west to south.

Deya’s Francesc Xavier Salas described it as “an impressive fireball that showed a very powerful sky blue light inside and an outer layer and tail with a greenish tint.

The fireball is a very bright meteorite, ranging in color from red to blue, and its composition determines its color; sodium emits a bright yellow light, nickel emits green, and magnesium emits blue-white.

Luke Garcia of Soller says that he accidentally glanced up at the sky a few minutes before 9:30 pm and saw a large luminous sphere that was divided into seven or eight parts.

Sources from the Institute of Space Sciences, which depend on the Consejo Superior de Investigaciones Científicas or the CSIC and the Institut d’Estudis Espacials de Catalunya or IEEC, have confirmed that their experts are working to reconstruct the trajectory and orbit of the fireball, which has been cataloged as SPMN230221.

On February 23, the Meteorite Exploration Network recorded a fireball in several parts of the country: Andalusia, Aragon, Castile-La Mancha, Catalonia, Madrid Community, Valencian Community, Extremadura, Mercia, and it was seen from an observation station in Ibiza.