Methane on Mars can produce microorganisms 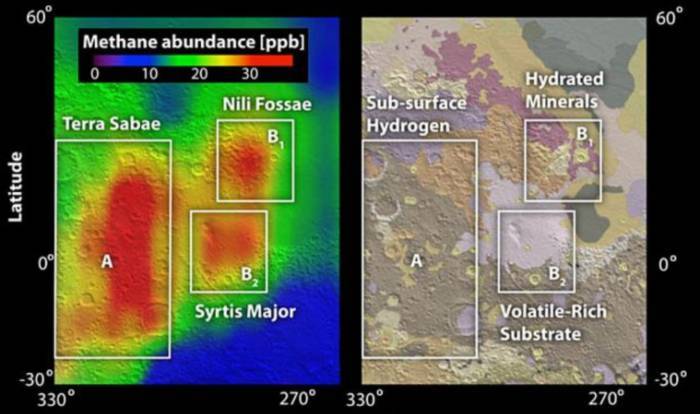 Terrestrial archaea that produce methane, to easily survive in Martian conditions, so theoretically, this gas in the atmosphere of Mars may receive as a result of the activity of local microorganisms.

Scientists from the University of Arkansas (USA) tested whether Methanothermobacter wolfeii, a kind of archaea that consumes hydrogen and produces methane, to survive under the surface of Mars. It turned out that these archaea share with all successfully tested in laboratory conditions simulating a stay on the red planet. The authors believe that this type is quite suitable for living in the lithosphere of Mars. Earlier we found out that he can live on the surface in the area of water flows. It is likely that similar microorganisms produce methane on Mars. About the study reports the website of the University.

The researchers subjected Methanothermobacter wolfeii the action of pressure up to 1200 atmospheres of the earth, heating to 55 degrees and the pH of the environment from 4,96 (acidic conditions) to 9.13 (highly alkaline conditions). In all these ranges the archaea not only did not die, but hard and shared faster than at normal pressure and pH. In an acidic environment, they multiply faster, higher pressures in alkali after several hundred atmospheres archaea has slowed, but still didn’t stop him.

All models of the subsurface of Mars show that at a depth of from 1 to 30 kilometers, the temperature and pressure are not beyond tested in this study in the laboratory. And pH no of the geological survey it is impossible to know, but almost all conceivable formulations of the lithosphere of Mars should have it within the range tested in the experiment. This means that if in the depths of Mars, there is hydrogen (carbon dioxide comes from the atmosphere), methanogens of this species can thrive there.

Today we know that below the surface of Mars a lot of water. On the surface it is represented mainly by ice, but the depth of 600 meters and more than warm enough for water transfer in a liquid form. In her presence the heated rocks are serpentinization — the process whereby hydrogen is released. The methanogens consume it and carbon dioxide as waste products releasing methane.

The study is motivated by the fact that Mars has in recent years found atmospheric methane. He only appears in the warm season and the cold disappears quickly. This gas is rapidly destroyed by ultraviolet and without makeup from underground sources can not exist. On Earth almost all the methane is of biogenic origin, that is created by living organisms-methanogens. This gave rise to suspicions that on Mars there are analogues of terrestrial methanogens. The new work shows for the first time that they really can live in the depths of the planet, and to withstand extremely high pressure — more than at the bottom of the Mariana trench.

The archaea are called single-celled organisms, distinct from both bacteria and eukaryotes. They have no cell nucleus or any membrane organelles. Archaea can exist and multiply in conditions that are fatal to bacteria and any other organisms — for example, in water heated to 120 degrees.