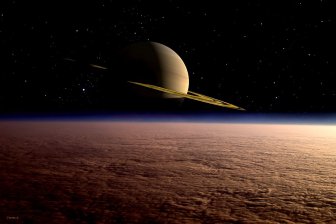 Scientists from France have proposed a new explanation for the tilt of the giant planet Saturn. According to the researchers, the satellite Titan could, by its position, affect the tilt of the planet. Preliminary calculations of scientists say that this could have happened relatively recently – less than one billion years ago.

The generally accepted hypothesis explaining the horizontal displacement of Saturn associates the position of the giant planet with its interaction with other cosmic bodies, namely with gas giants.

Scientists agree that during the formation of the solar system, the giant planets began to shift to the outer part of the system under the influence of each other’s gravitational forces. As it moved, Saturn tilted 26 degrees and remained in that position when it hit the Kuiper asteroid belt. The giant planet has remained in this position to this day.

Scientists from France, conducting a study, argue that the tilt of Saturn occurred no more than one billion years ago due to the migration of Titan. Scientists explained that at the moment these are only guesses, since there is no official confirmation of this. The upcoming expedition to Titan of the Dragonfly spacecraft will help shed light on many processes, including the tilt of Saturn.