Mineral deposits on Mars emerged due to eruptions. 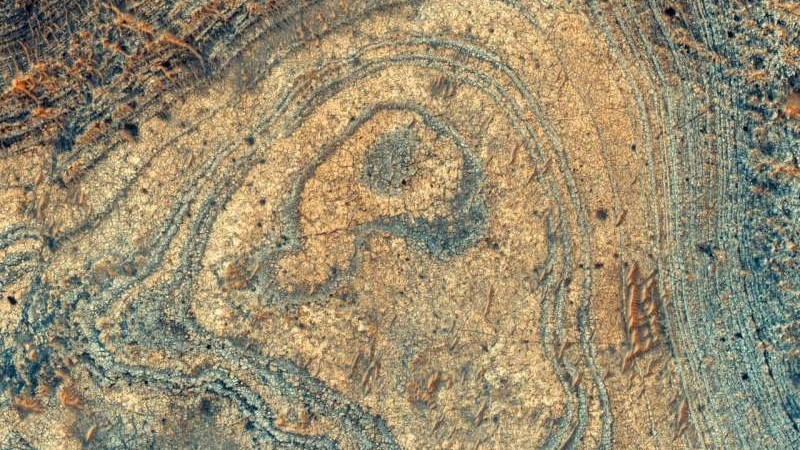 A new study found that the likely source of a strange mineral deposit near the landing site of the next NASA rover was ashes from ancient volcanic eruptions.

The study, published in the journal Geology, will help scientists draw up a graph of volcanic activity and environmental conditions on young Mars.

“This is one of the most tangible evidence that explosive (explosive) volcanism often occurred on early Mars,” said Christopher Kremer, a graduate student at Brown University who supervised the work. “Understanding the activity of eruptions on early Mars is important for understanding the water balance in Martian magma, the abundance of groundwater and the thickness of the atmosphere.”

Explosive eruptions occur when gases dissolve in underground magma. When the pressure of the dissolved gas is greater than the rock can withstand, it explodes, sending a cloud of ash and lava into the air. Scientists believe that this kind of eruption should have occurred very early in Martian history, when there was more water to mix with magma. When the planet dries out, explosive eruptions will subside and give way to an effusive, easier spout of lava onto the surface. According to Kremer, there is a lot of evidence of the effusive phase on the Martian surface, but evidence of the early explosive phase is not easy to detect using orbital tools.

This new study looked at a field in the region called Nili Fossae, which has long been of interest to scientists. The deposit is rich in mineral olivine. This suggests that it begins deep underground, but it is unclear how the material hit the surface. Some researchers have suggested that this is another example of an effusive lava flow. Others have suggested that the material was extracted due to the asteroid’s bounce — the blow that formed the giant Isidis basin, which contains the field.

For this study, Kremer and his colleagues from Brown used high-resolution images from the Mars Reconnaissance Orbiter to study the geology of the field in detail. The work showed that the field evenly spreads over the surface in the form of long continuous layers uniformly covering hills, valleys, craters and other objects. This uniform distribution is much more consistent with the fall of the ash than the flow of lava. Lava flow would accumulate in low-lying areas and leave a thin footprint in the highlands.

Researchers claim that ashes also helps explain unusual mineral signs of a deposit. Olivine shows signs of a widespread change as a result of contact with water — a much larger change than other olivine deposits on Mars.

According to the researchers, the data from orbit incline to ash. But the team will not have to rely only on orbital data for a long time. It is planned that NASA’s Mars 2020 Mars rover will land in the Jezero crater, which is located within the olivine deposit. An area rich in olivine will almost certainly become one of the goals of a rover’s intelligence, and will help to finally clarify what kind of field it is.