Mysterious hexagon of Saturn in the new photo of “Cassini” 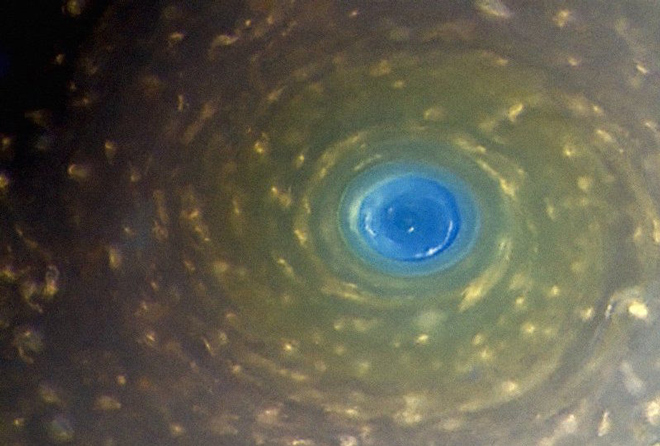 Following the images of the rings of Saturn and its satellite-pelmen, NASA’s Cassini spacecraft surprises with new types of gas world. This strange blue drop in the golden environment is an atmospheric vortex in the center of the northern polar hexagon of the planet.

Jason Mayger compiled an image of the raw data published on Thursday in the archive of the Cassini images. “If I see something interesting, and so it turns out that it is captured in color channels with visible light, I collect a color version in Photoshop.”

Here is the same polar whirlwind last October, representing a hurricane 1,250 miles wide, which is in the center of a much larger jet stream, called the hexagon of Saturn. In the center there is a hint of azure education, but if you believe a new image not yet calibrated by NASA, the events in the north over the past months have become more dramatic. 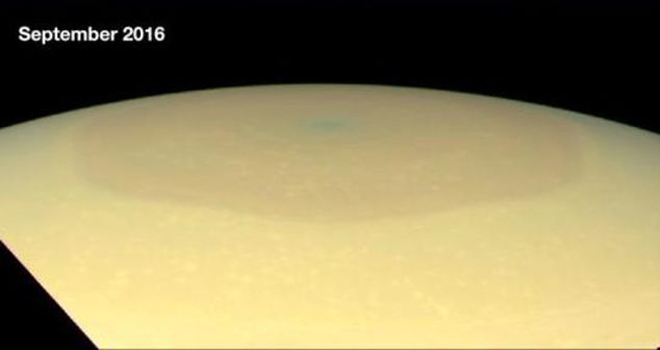 The image above is taken from a press release from NASA, which shows a striking change in the color of the entire northern polar hexagon from 2012 to 2016. As suggested by the agency, the chameleon effect was caused by “an increase in the production of photochemical haze in the atmosphere as the north pole approaches the summer solstice in May 2017 “.

In other words, as the north pole of Saturn tilts toward the Sun, the interaction between sunlight and atmospheric compounds that produce haze begins to intensify, changing the overall shade of the hexagon. As noted in 2013 by Kunio Sayanagi of the Cassini Imaging team, the hexagon acts like an ozone hole on the Earth, creating a barrier to particles of the atmosphere. Therefore, any chemical changes within it remain within it.

In his speech at the annual conference of the American Geophysical Union in San Francisco in December last year, planetologist John Blaloc confirmed that while the northern polar vortex of Saturn is really blue, the rest of the hexagon is now clearly yellow. “The increase in brightness of this region is consistent with the growth of photochemical haze products in the upper atmosphere,” the scientist said.

Meanwhile, the “Cassini” is still six and a half months of brave maneuvers, which promise humanity one of the most stunning planetary portraits in space history.