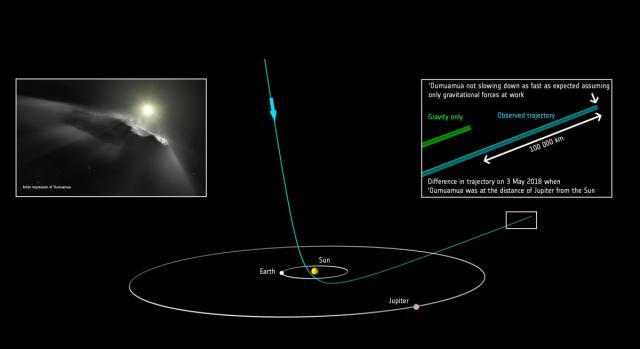 Oumuamua, the first interstellar object discovered in the solar system, flies away from the Sun faster than expected.

This abnormal behavior was recorded by observations of astronomers around the world, including the ESO Very Large Telescope in Chile. New results indicate that Oumuamua is probably not an asteroid, but an interstellar comet.

Oumuamua, the first interstellar object discovered within the solar system, has been carefully studied since its discovery in October 2017. Summarizing data obtained from the ESO Very Large Telescope and other observatories, an international group of astronomers discovered that the object is moving faster than predicted. The measured acceleration is very small: in general, Oumuamua’s motion still slows down under the influence of the Sun’s attraction, but still not as much as it should follow from the laws of celestial mechanics.

The research team led by Marco Micheli from the European Space Agency analyzed several scenarios that could explain the greater than the pre-calculated speed of the unusual interstellar guest.

The most probable explanation is that Oumuamua throws out matter from its surface under the influence of heating by solar radiation: a gas is released. It is the reaction force resulting from this ejection, which is believed to be the cause of the small but constant acceleration that occurs when Oumuamua moves away from the solar system. As a result, it turns out that the asteroid flies away faster than expected: on June 1, 2018, its speed was about 114 thousand kilometers per hour.

It can be seen from the observation data that the object accelerates the slower the farther it moves away from the Sun, which is typical for comets.

Usually, when a comet is heated by the Sun, it emits dust and gas, which form around it a cloud – the so-called coma – and also an extended tail. However, in this case, the research team could not register any visible traces of gas release.

“Strangely enough, we see no dust, no coma, no tail,” says co-author Karen Mich, from the University of Hawaii in the United States, who led the Oumuamua research team in 2017: “Perhaps the dust Oumuamua throws out is unusual coarse-grained. ”

Researchers put forward the following hypothesis: fine dust grains covering the surface of most comets during the long flight of Oumuamua through interstellar space collapsed due to erosion, and only dust grains of larger size remained. The cloud consisting of these large particles would not be bright enough to be recorded, but its presence could explain the unexpected change in Oumuamua’s speed.

The unsolved mystery is not only the hypothetical outflow of gas from Oumuamua, but also its interstellar origin. The group carried out new observations of Oumuamua in order to accurately determine the trajectory of the object, which could allow us to trace it back and determine the mother star from whose system this cosmic body flew to us. However, the new results obtained show that this information is more difficult to obtain than expected.