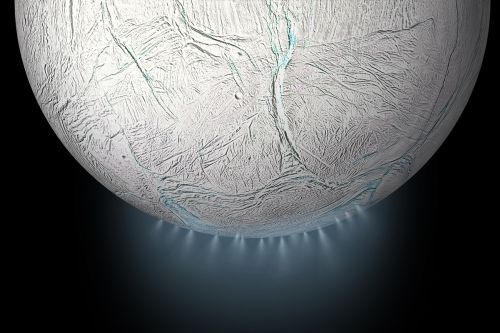 The southern pole of Enceladus was wounded as a result of some cosmic collision. And he bleeds, only in his veins water vapor. So allegorically expressed by scientists about the possible cause of beating geysers at the South Pole of Enceladus – one of the most famous and most mysterious satellites of Saturn.

According to scientists, a space rock could crash the southern pole of Enceladus less than a hundred million years ago.

To date, the area near the South Pole of Enceladus is one of the biggest mysteries in our entire Solar System. Singing here from the ice surface, geysers release water vapor and ice particles into the surrounding space, as well as a large amount of thermal energy. According to the latest research, thermal emissions in this area are approximately 10 gigawatts higher than previously thought. The power of this thermal energy can be compared with the total capacity of 4000 wind turbines operating at full force. At the same time, the rest of the moon is quite cold and relatively homogeneous.