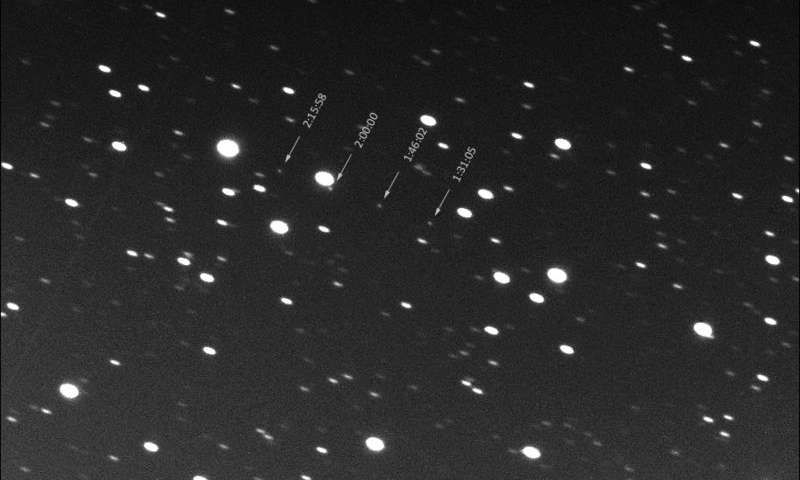 Discovered in 1983 with the spacecraft IRAS, near-earth asteroid Phaethon is interesting primarily for its extremely unusual elongated orbit, which in the process of its motion around the Sun it crosses the orbits of all four terrestrial planets.

The Phaeton belongs to a group of Apollo, although it is assumed that the asteroid belongs to the family of Pallas. He more than any other named asteroid approaches the Sun, its perihelion is only 0,14. E. (21 million km). The scientific community believes that this object is the parent asteroid meteor shower Geminids observed every year in the December night sky. For this reason, researchers are actively trying to detect any activity around the asteroid that is associated with emission of dust particles to them. However, the detection of this kind of activity was always accompanied by some difficulties because of its significant approach to the Sun, and its elongation (angular distance between Sun and planet as seen from Earth).

According to the statements of Joseph Genusa amplitude of the light curves (functions of changes in brightness of an astronomical object over time) Phaeton make up only 0.1 magnitudes.

To create the model the team used Hanusa 55 of the light curves collected between 1994 and 2015, plus 29 of the light curves made by the team of telescopes around the world, the largest of which was UH88 the University of Hawaii with a diameter of 2.2 meters (88 inches).

The reported sidereal period of revolution (period of time during which any celestial body is a satellite makes around the main body of the asteroid is 3.6 hours, and its diameter is 5.1 km Team also measured its thermal inertia, optical geometric albedo and surface roughness.

The data do not conflict with early approximate measurements.

In December 2017 Phaeton will approach the Earth at a distance only to 0.069. E. (10 million km). During this event about the asteroid will be collected huge amount of data.