Mysterious photograph of Mars has led scientists to a dead end 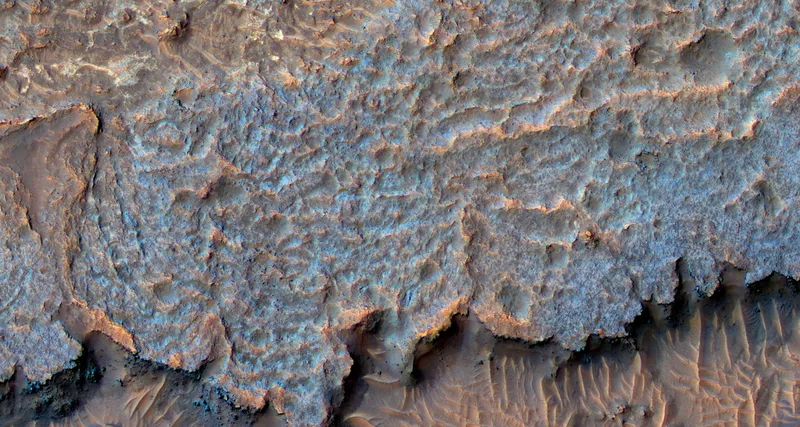 Scientists meet each new image from Mars with great interest, because the images of the Red Planet are practically the only way to learn something new about it.

A snapshot of the NASA Mars Reconnaissance Orbiter (MRO) spacecraft has left astronomers confused. The MRO’s High Resolution Imaging Science Experiment (HiRise) camera captured a series of shots showing unusual rocky ridges near the Aureum Chaos region on Mars. Scientists received these images back in 2011 and have only now shared them with the public. Having published this mysterious photo, astronomers admitted that they absolutely do not understand how these ridges appeared.

To further study Mars (landing new rovers and sending missions with people), it is very important for scientists to understand the geological features of the planet. This will not only help in planning future programs, but also indicate signs of life (if any). In an effort to explain the mysterious ridges in the MRO photograph, a team at the University of Arizona theorized that these bizarre rocks were formed from water and the remains of volcanic activity.

“After the process of ‘mixing’ followed, perhaps billions of years of wind erosion, which left cemented cracks in the form of high ridges,” – said the scientists about their assumption.

True, this is only a theory. No one still knows exactly what exactly contributed to the formation of these ridges. Scientists say it will take years and new missions to Mars to solve this mystery. Rough landscapes, such as the one shown in the photo, are very difficult places to explore. Planting humans or rovers in such an area is a bad idea. Therefore, researchers will have to work hard to figure out how to explore these lands.