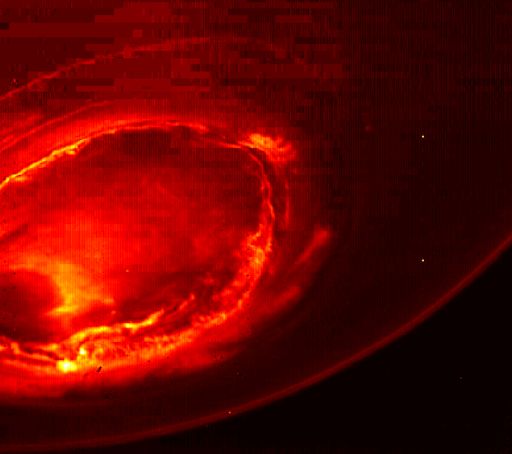 27 Aug spacecraft NASA’s “Juno” for the first time flew over the South pole of Jupiter. During the approach the probe noticed a delightful whirlwind of infrared light.

“Although we knew that the approaching South pole of Jupiter may open up the Antarctic, the lights of the planet, we were surprised to see them for the first time,” says Alberto Adriani from the Institute of astrophysics and planetology in Rome. Adriani is part of the research team mapping device “Juno”, which was recorded by the Jupiter Aurora.

Another tool, “Juno”, “Waves” (Waves) recorded low-frequency (100 kHz) radio signals emanating from the polar lights gas giant. To make them audible, scientists an Iowa University transferred them to the range of frequencies available to the human ear. Listen to the sound of the Aurora on Jupiter, with 30 seconds of the video:

Jupiter auroras sound cryptic and mysterious by themselves. Unlike the Earth, which is illuminated with the polar lights in response to solar activity, Jupiter produces them himself. The source of energy for the production of auroras — the rotation of the giant planets.

Although Jupiter is 10 times wider than the Earth, he manages to spin 2.5 times faster than our small planet. And as you know, if you rotate the magnet — get an electric generator. Jupiter is a very large magnet. Induced electric field accelerates the movement of particles to the poles of Jupiter, where they formed the Arctic.

Remarkably, most of the particles that rain down on the poles of Jupiter, spewing from the volcanoes of IO. How this complex system actually works is a mystery.