Mystery of the existence of Pluto’s atmosphere 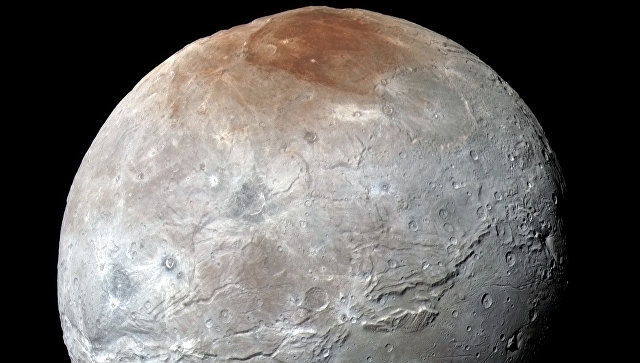 Pluto’s atmosphere has evaporated into space over the last few million years due to the existence of Charon, periodically closing the Pluto from the solar wind, carrying away molecules of the gas.

“The atmosphere of Charon is temporary, however, when it is present, Charon becomes a kind of shield that protects the atmosphere of Pluto from destruction and redirect a large part of the solar wind flow in hand from the dwarf planet,” says Carol Paty (Paty Carol) from the University of Georgia in Atlanta (USA).

When the New Horizons probe arrives to the system Pluto, Alan stern, head of mission and his team were surprised to find that Pluto has a complex atmosphere. There are clouds consisting of many complex molecules, sometimes snow, blowing wind and originate other processes. It turned out that Pluto’s atmosphere is more similar to the complex air gap of the Earth or Titanium than simple gas envelope is like the Pluto of planets, situated at a great distance from the Sun.

The other big oddity, open New Horizons, was how Pluto interacts with the solar wind. As noted by scientists from NASA, the flow of charged particles and plasma almost does not carry the molecules of the gases of Pluto’s atmosphere into space, so as a dwarf planet almost does not interact with him for some strange reason, a scientist.

The answer to this riddle, as found by Pati and her colleague John Hale (John Hale), the interaction of the temporary atmosphere of Charon with the solar wind.

By studying the data that New Horizons received during passage through the Pluto system, the Pati Hale drew attention to the fact that on the surface of Charon are large craters, the formation of which a large amount of water and nitrogen ice that form the basis of rocks of the moon of Pluto, was supposed to evaporate and form a temporary atmosphere.

This atmosphere, as scientists suggested, was to influence how the solar wind passes through the Pluto system. Hale and the Party tried to figure it out by building a computer model of Charon and Pluto. This model was based on data collected in the study of Titan and Ganymede, satellites of Saturn and Jupiter, as well as observations by New Horizons.

As shown by calculations, the appearance of even a very thin temporary atmosphere on Charon very much affect how it interacts with the solar wind. In the presence of an atmosphere the satellite will play the role of a breakwater that will deflect the flow of protons emitted by the Sun, and will not allow them to collide with gas molecules in the atmosphere of Pluto. Thus, the strength and density of the solar wind decrease almost two times, which greatly slows down the leakage of Pluto’s atmosphere into space.

On the one hand, it explains why Pluto still has atmosphere, despite the lack of a magnetic field, and on the other the results of the calculations of the scientists were about 2.5 times lower than the real values of the solar wind velocity and density of the particles made at New Horizons.

Further analysis of the data and calculations will help to know, how did this discrepancy. They will calculate the density and the mass of Pluto’s atmosphere in the first days of his life. The original composition of Pluto’s atmosphere is extremely important for scientists, because it will tell you, what was the primary matter of the Solar system.