Named another reason for the existence of liquid water on Mars 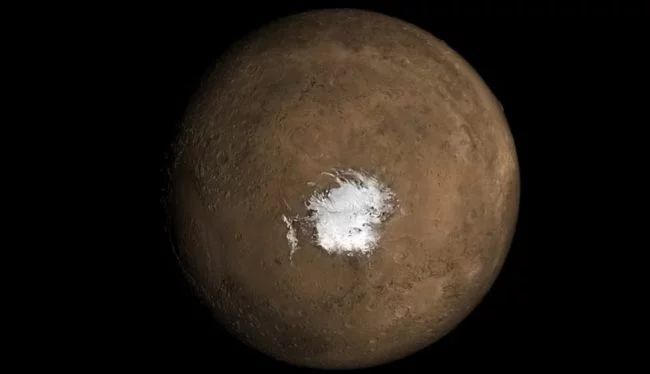 In the summer of 2018, NASA researchers found signs of a liquid lake under the ice cover of the south pole of Mars. According to the Mars Express radar equipment, the lake is at a depth of 1.5 km and extends as much as 20 km. Initially it was believed that the water contained in it does not freeze due to the huge amount of dissolved salts of sodium, magnesium and calcium. Now researchers have found a new reason for why water under an ice crust with a temperature of -65 degrees still remains liquid.

It is believed that salt can not be the only cause of this phenomenon. Most likely, inside the planet there is a source of heat, and the most plausible option at the moment is the presence of hot volcanic magma. Scientists already know that once upon a time Mars was a very volcanically active planet, but in the past few million years it has become much calmer.

The fact that there is liquid water on the surface speaks of the activity of volcanoes to this day. According to the calculations of researchers, in order to preserve the necessary amount of heat, volcanic activity had to be maintained for the last 300,000 years and accumulate magma at a depth of no more than 10 km. Most likely, the way it is.

This means that inside of Mars there is still an active formation of magma chambers, and the depth of the planet is not a cold and dead place.

Ali Brans, one of the authors of the study

If accumulation of water is actually possible on Mars, this can greatly facilitate research missions. Astronauts do not have to take large amounts of drink with them, and they will have more room for more useful cargo. It also means that somewhere in the bowels of the planet there can be living organisms, which someday can be called “the first aliens”.