Named the cluster of alien probes 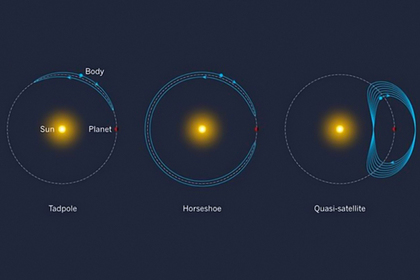 American physicist James Benford suggested that co-orbiting celestial bodies that move in the same orbit as Earth can be alien probes. Although other researchers in the field of SETI (the search for extraterrestrial intelligence) consider this possibility unlikely, they do not deny that the idea may be useful for research, reports Live Science.

The first co-orbital asteroid was discovered in 1997, and most of the remaining 15 objects – after 2010. One of them is called the “closest companion of the Earth” (Eng. Earth’s Closest Companion) and is located 38 times further than the Moon. This object forms a stable orbital configuration with the Earth, therefore, according to Benford, it is ideally suited for the role of an alien probe, which is designed for remote monitoring of the nearest planet.

Benford suggests observing celestial bodies using optical and radio telescopes, as well as sending radio signals in their direction. In addition, you can send small devices to them. Even if the search for traces of alien civilizations among co-orbiting asteroids is not successful, this will indicate that no one sent probes to Earth. In this case, the probability of the existence of extraterrestrial intelligence is significantly reduced, the scientist believes.