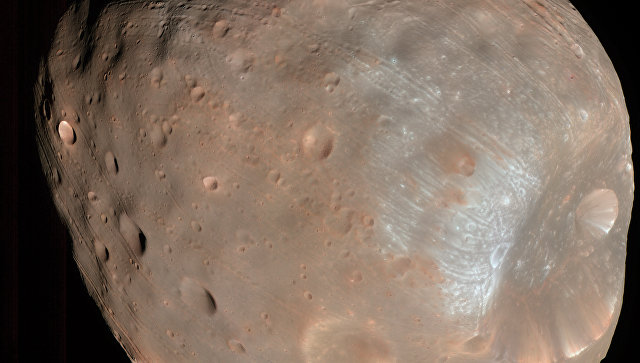 Flashes and coronal emissions of matter on the Sun can charge the surface of Phobos and Deimos, the moons of Mars, which will make them dangerous for descent modules and orbital probes, as well as for future marsonauts, NASA experts say.

“We found that astronauts or rovers traveling on the other side of Phobos that is turned away from the Sun and looking at Mars will accumulate large discharges of static electricity, they are unlikely to threaten the health of the marsons, but they will interfere with the work of the electronics of spacesuits and other devices that we will have to protect against such impacts, “said William Farrell of the Goddard Space Flight Center in Greenbelt, USA.

Today, around Mars, two small irregular-shaped satellites rotate – Phobos and Deimos, 22 and 12 kilometers in diameter, remote from the surface of the red planet by only 10 and 23 thousand kilometers. Today many scientists believe that both of these moons are not planets, but asteroids, captured by the attraction of Mars in the distant past.

Interestingly, Phobos draws closer to Mars and will be destroyed and turned into a giant dust ring in 20-40 million years, and Deimos, on the contrary, moves away from him and in the distant future he will “run away” from the red planet.

Now scientists can hardly explain why this happens, and how Deimos and Phobos could be in their current orbits. Recently, astronomers have suggested that in the past Mars could have had three moons, one of which had already fallen to its surface.

NASA’s plans for mastering Mars, as well as the ideas of Elon Mask and many other “pioneers” of space almost always include the bold idea of ​​building the first base not on the surface of the red planet, but on one of its two moons. This, according to the authors of such plans, will significantly reduce the cost of delivering goods to Mars and will allow it to master it faster than when carrying out “direct” landings on its surface.

Farrell and his colleagues discovered an unexpected source of danger, which can significantly complicate the construction of similar bases, by studying the data that the MAVEN probe collected during collisions of solar plasma emissions with the atmosphere of Mars.

Analyzing this information, scientists drew attention to the fact that flashes of ultraviolet and particles of solar plasma will even more impact the moons of Mars, knocking out electrons from its surface. This prompted them to calculate how much their surface is “charged” when colliding with similar emissions, and whether this static electricity will threaten people’s lives.

As it turned out, on the night side of Phobos, where these electrons will not be neutralized by ions of the solar wind, there will be areas capable of generating powerful static electricity discharges, whose voltage will be several tens of thousands of volts if an astronaut passes through them in a Teflon suits.

These ranks will not endanger people’s lives, but they can easily damage electronics and various sensors if the base inhabitant touches any conductive surface after such a walk.

The strength of these discharges, according to planetologists, will be especially high during flares on the Sun, but they will also exist under relatively “calm” cosmic weather. All this, according to Farrell and his colleagues, significantly complicates the plans for studying the satellites of Mars and the construction of bases on their surface.