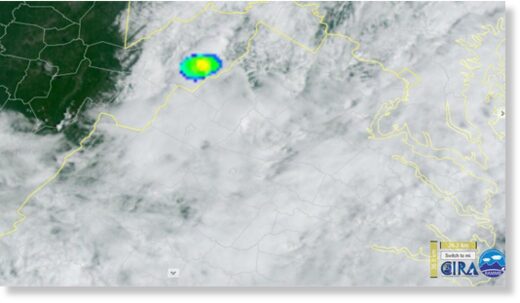 On Friday morning across Harrisonburg, Virginia, residents began reporting an “explosion” and a shaking of the ground. NASA confirmed that it was a meteorite fall that, exploded in the sky. There were also reports of power outages in Hardee County.

Satellite data recorded lightning flashes over Hardee County around 10:30 a.m., but there were no thunderstorms in the area. This indicated that something had fallen from the sky, and that something was a very large meteorite.

The problem with the eyewitness reports is that it was very cloudy and the view was obstructed, making it impossible to capture the event in photos and video. As for the meteor cameras, they are turned off during daylight hours to protect the cameras from sunlight.

One pilot told the American Meteor Society that he and a co-pilot observed the meteor at 36,000 feet.

The brightness of the meteorite was probably about the same as the moon. This corresponds to an energy of one to two tons of TNT, giving a mass of about 25 kilograms for the object that caused the fireball (assuming a typical velocity of 45,000 miles per hour). The event may have spawned meteorites somewhere in the northern Virginia/eastern West Virginia area, NASA said.