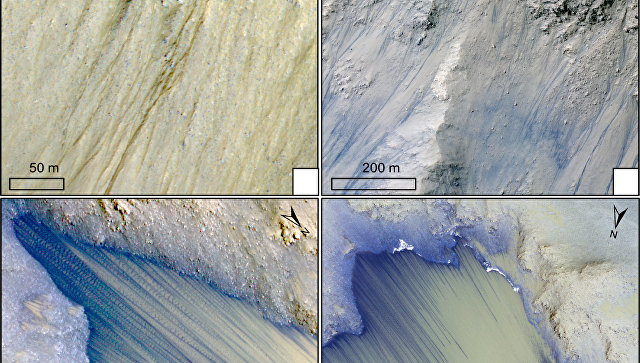 Satellite images of the surface of Mars showed that the canyons on the equator of the red planet fraught with thousands of dark lines that represent traces of water entering the soil from an unknown source.

“These marks are so many that it is difficult for us to keep track of them all. It turned out that they appear on the slopes of the canyons are much more common than we previously believed. If current data do not lie, it is the most dense concentration of them on the planet, and if they really are the most recent out of water on the surface, this means that this system of canyons is even more interesting than it suggests their unusual Geology,” said Matthew Chojnacki (Matthew Chojnacki of the University of Arizona in Tucson (USA).

Line water the energy of Mars

In 2011 Alfred McEwan of the University of Arizona in Tucson (USA) and his colleagues studied images taken by the HiRISE camera aboard the probe MRO. Some pictures of the steep slopes and the edges of the craters are dark band width of 0.5-5 meters, which appear and grow in summer and disappear in the Martian winter.

As suggested then, planetary scientists, these strips may be flows of very salty water. Such water remains liquid at summer temperatures on these slopes reaching 250 to 300 degrees Kelvin, or about minus 23 to plus 26 degrees Celsius. In September last year, after re-examination of images from MRO, planetary scientists have confirmed that these traces are indeed left with salty streams of boiling water. While scientists don’t know what is its source – the atmosphere or underground deposits of ice.

McEwan, Chojnacki and their colleagues came across another mystery with these dark lines, by studying the images received by the probe MRO in the study of Valles Marineris, a canyon system near the equator of Mars, where recently another group of scientists from the University of Arizona found traces of vulkanicheskikh lakes, where potential could exist life.

Studying the pictures of these canyons, scientists found hundreds and thousands of dark lines, similar to those which they had seen five years ago in the high latitudes of Mars. The appearance of these lines, judging by the pictures HiRISE, has led to dramatic changes in the appearance of the surface of the valleys of the Mariner according to the calculations of authors, their appearance indicates that the soil of Mars in this region contain or have absorbed about one million cubic meters of water.

It would be enough to fill the largest skyscraper in new York from Foundation to top, or to fill 40 Olympic swimming pools. A similar volume of water, according to scientists, is unlikely to accumulate in the soil of Mars as a result of “suction” of water from the atmosphere of the red planet salts in its soil, which significantly complicates the situation with the search for its sources.

The fact that most of these lines in the valleys of the Mariner is not located on the edges of craters, as in other regions of Mars and on a relatively flat and untouched parts of the surface. Here deposits of water ice may not be in the shallow depths where they can melt and form these “salty streams and dark lines.

Themselves McEwan and his colleagues believe that the water “sucked” from the atmosphere by salts, and does not rise to the surface of Mars, but the mechanism of this transport remains unknown. Scientists suggest that the water absorption may contribute to the unusual Geology and weather conditions in these canyons.

Therefore, dark lines on Mars are even more mysterious – for scientists now little doubt that water really is often found in liquid form under the surface of the red planet, but its source has not been determined. His disclosure, as scientists hope, will help you find the answer to the main mystery of Mars.