NASA doubted the discovery of traces of bacteria on Mars 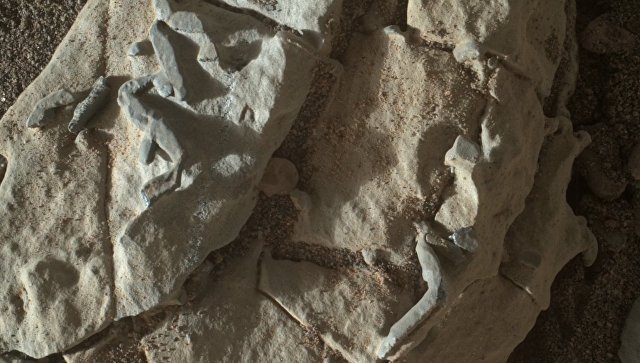 Mysterious microscopic structures similar to bacteria found recently by the Curiosity rover appeared as a result of the drying out of lakes or the movement of water currents, rather than were left by extraterrestrial organisms.

“When we looked at these structures and got more detailed photos of them, we realized that they really look like wands, but they do not have a round but angular shape. In other words, they are more like crystals than traces of microbial activity “Said Ashwin Vasavada, head of Mission Curiosity at NASA’s Jet Propulsion Laboratory in Pasadena, USA.

In mid-December this year Curiosity rover stopped for a few days at one of the points on the surface of the Vera Rubin ridge, located on the slopes of Mount Sharp. It is composed of hematite, a mineral, presumably created as a result of chemical processes in the waters of hot springs and volcanic lakes of Mars.

During this parking, the MAHLI camera, installed in the rover’s arm, received several photographs of nearby stones and the surface of Mars, which attracted the attention of the British planetologist Barry DiGregorio, a proponent of the theory that there had once been life on the surface of the red planet .

The British researcher found on one of these photographs dark undulating structures, similar in shape to the worms or the fossilized traces of colonies of microbes, which geologists often find in the oldest rocks of the Earth. In his opinion, such “fossils” could hardly have appeared on Mars abiogenic way.

This discovery, as Vasavad noted at the time, caused the scientific team of the mission to stop and deploy the rover to re-study these unusual structures. After that, the fourth rover continued its journey to the top of Mount Sharp, and discovered several other interesting geological formations in January and February that clarified the nature of its December find.

Not far from the habitat of these “bacteria”, according to the representative of NASA, the rover managed to find dark tubercles, similar to the deposits of gypsum, appearing on the bottom of the lakes on Earth at the moment when they completely dry up. In the neighborhood with these hillocks, as geologists suggested, crystals could also be formed from other salts and compounds.

Later, some of these crystals could “overgrow” sediments of other sedimentary rocks that did not have a crystalline structure, resulting in those deposits similar to bacteria that were found on the Vera Rubin ridge. The crystals themselves could later be washed with water, which is why the nature of these bizarre “sticks” caused so much controversy among scientists.

It is not yet clear when and how these crystals were formed. As the scientists note, they could have been born as at the bottom of a drying lake in those epochs when the Martian water reserves began to come to an end, and in the relatively “wet” period of its life in the deep layers of sediments on the lake bottom, where the water got worse all the time “overgrowth” of the bottom of the reservoir.

The scientific team Curiosity hopes that this mystery will be solved in the coming months and years, if the rover will find similar structures in other regions of the crater Gail.