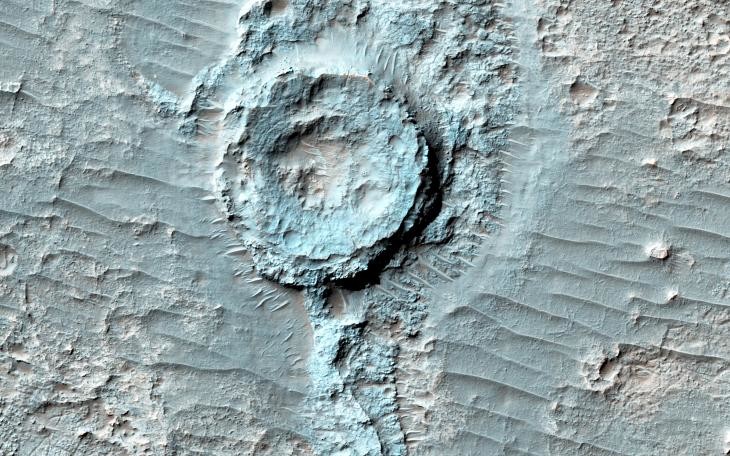 Scientists using the scientific tool of HiRISE, MRO discovered on Mars in the form of the relief, reminiscent of an inverted crater.

Shown in the image a circular feature, according to scientists, is an impact crater, which later filled with hot matter. Over time it has cooled and become more dense and resistant to erosion than the substance in its environment.

Discovered in the vicinity of the inverted structure of the craters had a characteristic shape that indicates that they arose later, shows a NASA facility.

Currently orbiting Mars are five stations. Three of them were American: Mars Odyssey (since 2001), MRO (2006) and MAVEN (Mars Atmosphere and Volatile EvolutioN, with, 2014). On the surface of the red planet are the American Mars Rovers Opportunity (2004) and Curiosity (2012). Rover Opportunity — record for the duration of the work, and Curiosity is the most heavy lunar Rover (it weighs 900 kilograms). Mars is heading the Russian-European ExoMars station-2019, which includes the Orbiter TGO (Trace Gas Orbiter) and landing demonstration module Schiaparelli. The station needs to reach the red planet in mid-October 2016.