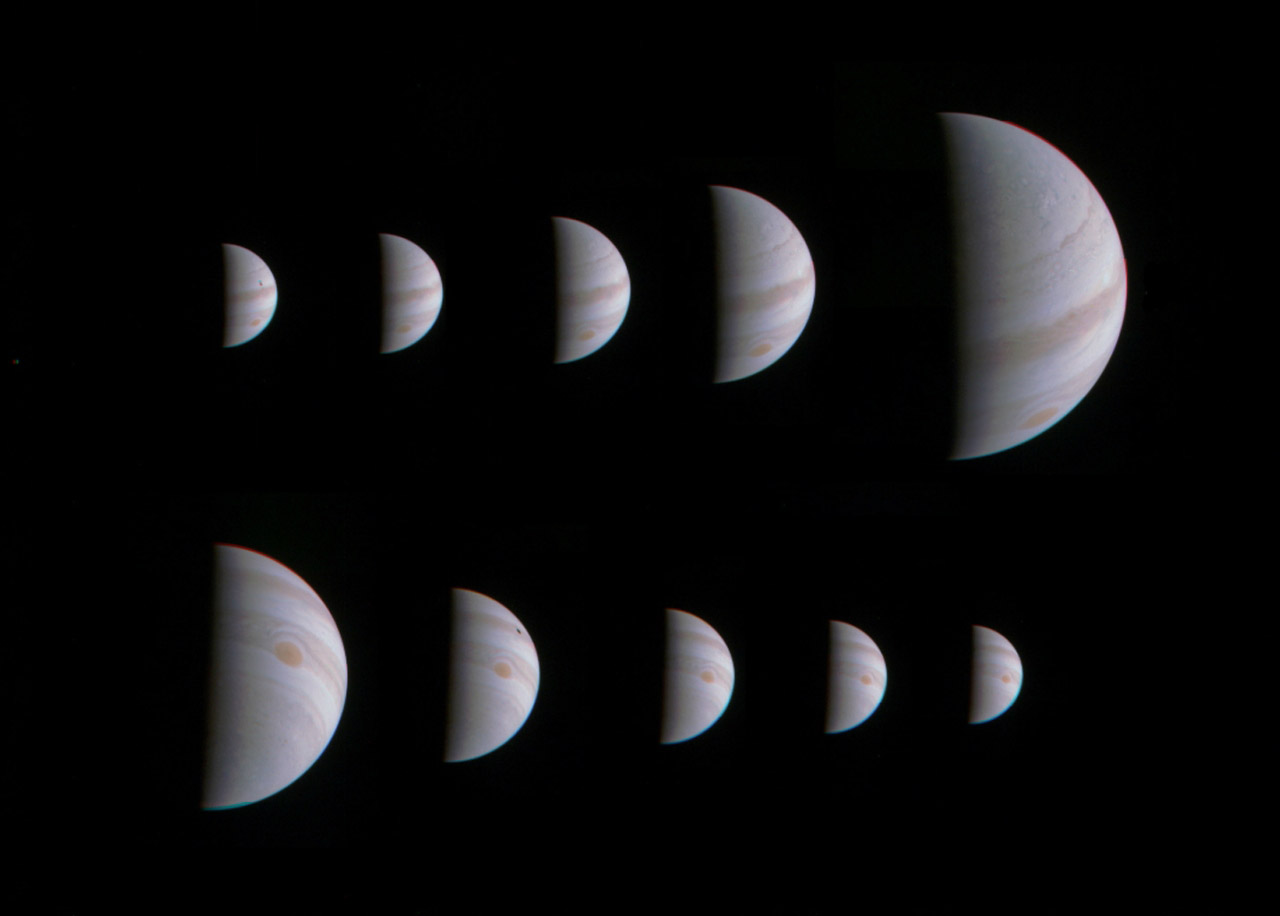 The first close-up pictures of Jupiter, taken by the spacecraft “Juno” has finally arrived. A gas giant in the pictures is barely recognizable. First look at the North pole of Jupiter, and nothing to do with what we have seen or imagined before, says Scott Bolton, the principal investigator of the Juno mission, which arrived in Jupiter orbit July 4. The largest planet in the Solar system really unique.

Gorgeous new photos swirling ball of gas was made on August 27 when “Juno” performed the first of 36 orbital approach to the planet. The machine was at a height of four thousand kilometers above the cloud tops of Jupiter. It took a day and a half, so all information is loaded, and it still parses the command of the mission.

Among the main surprises is the lack of striations and bands of clouds, which are many in the middle latitudes of Jupiter. Instead, the photo is of Roy cyclones, similar to air blue galaxy, each of which requires space.

Mission scientists were very surprised by the lack of the element that they expected to see: “Saturn has a hexagon at the North pole,” says Bolton. — Jupiter’s is nothing like that.” “Juno” will continue to monitor Jupiter for another year and a half. We are waiting for new surprises from the unknown giant planet!

Data collected during an overflight, “Juno” will long be analyzed, but one can already say for sure: the polar regions were quite similar to the rest of Jupiter, or other planets of the Solar system. 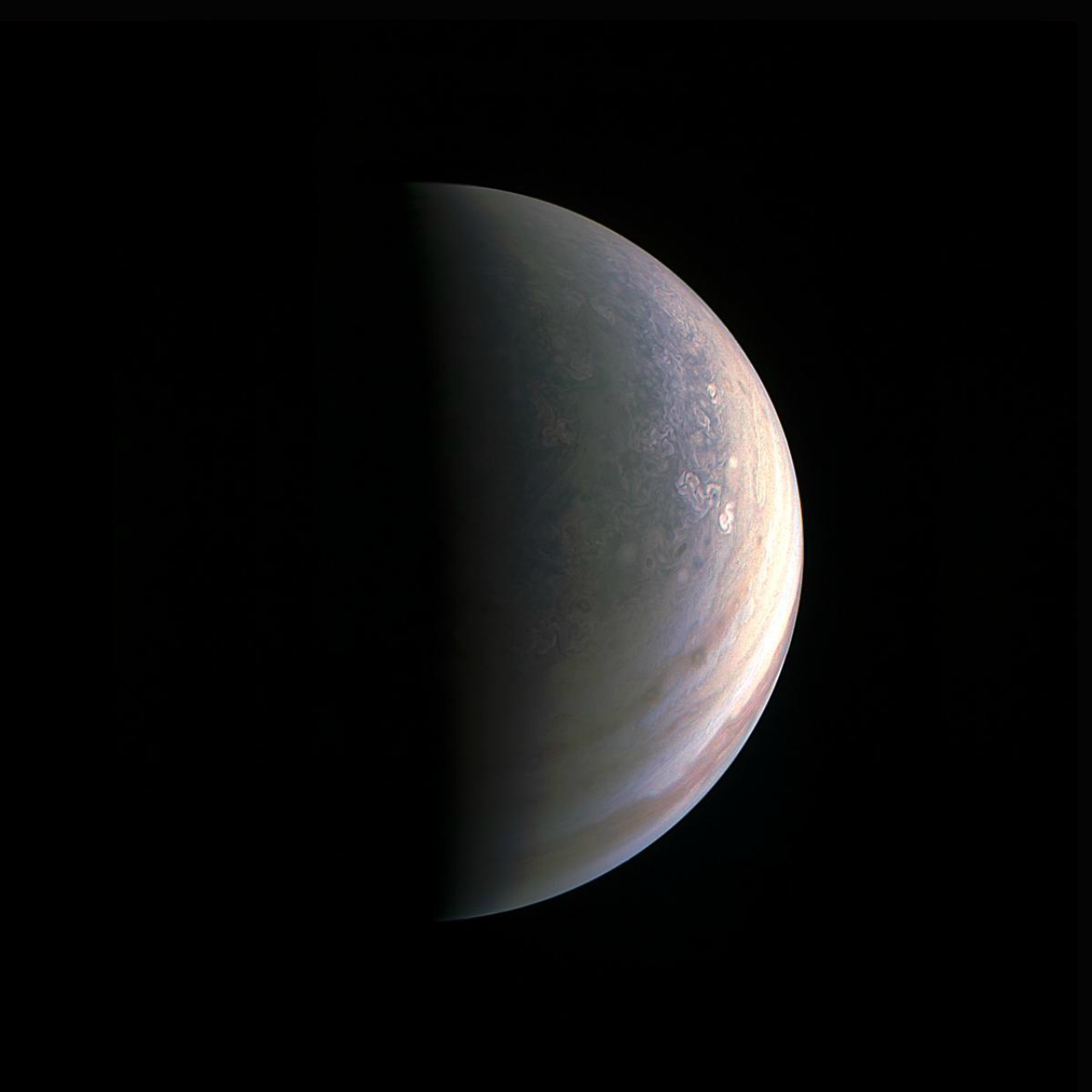 The North pole of Jupiter from a distance of 195 thousand kilometers (two hours before closest approach).

Judging by the photos, the poles did not hold our usual “lanes”, which are the hallmark of Jupiter. Instead, there are many complex atmospheric systems, whose functioning is yet to understand. Interestingly, some of the photographed storms rotate in, and the other counterclockwise. 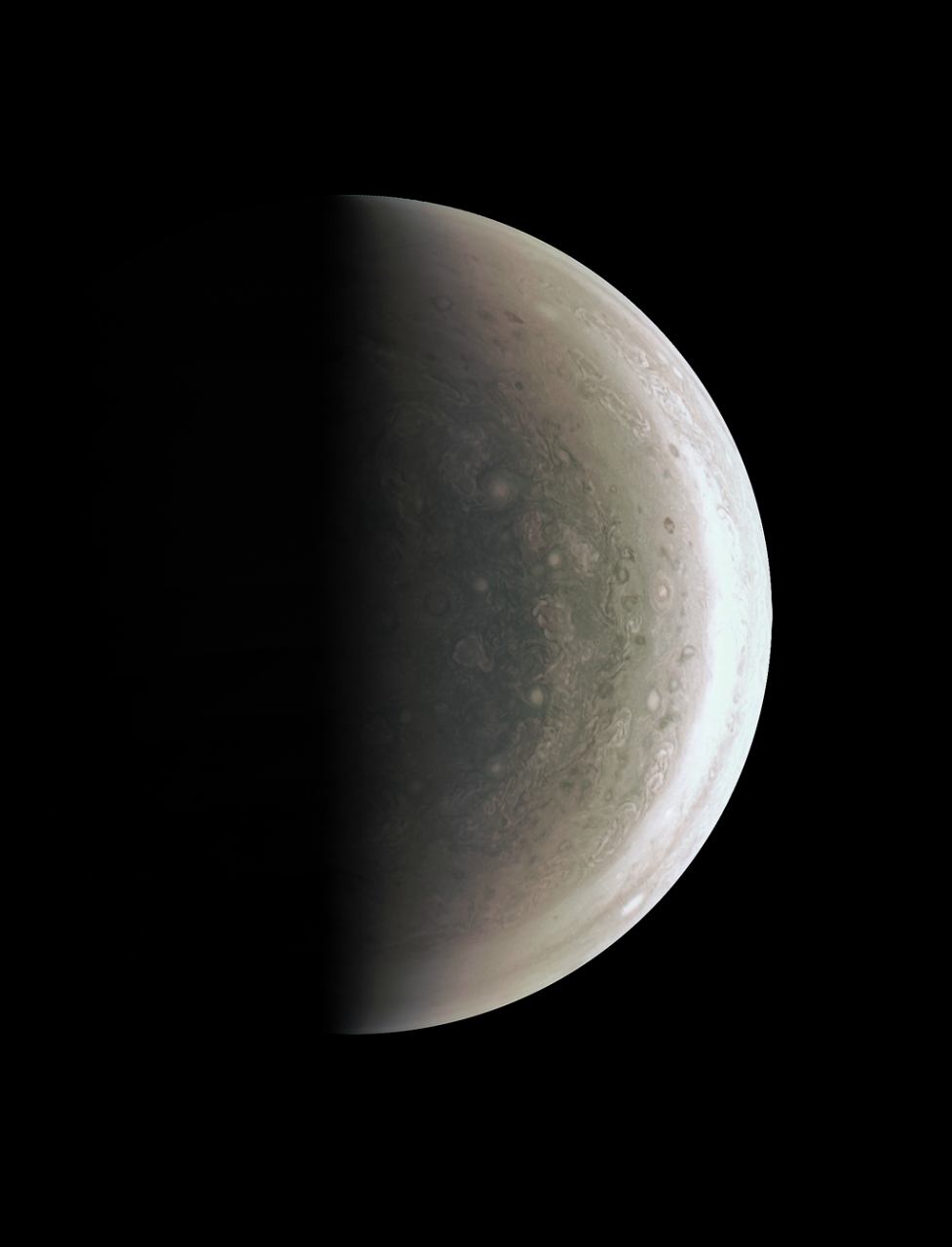 The South pole of Jupiter from a distance of 94.5 thousand kilometers

The color of the atmosphere in the polar regions is also different from other parts of the world — then dominated by shades of blue. In General, the poles of Jupiter was a pleasant surprise, kasalivich quite similar to what we were expecting. Instead of a massive hurricane we’ve got a variety of structures of different shapes and sizes. 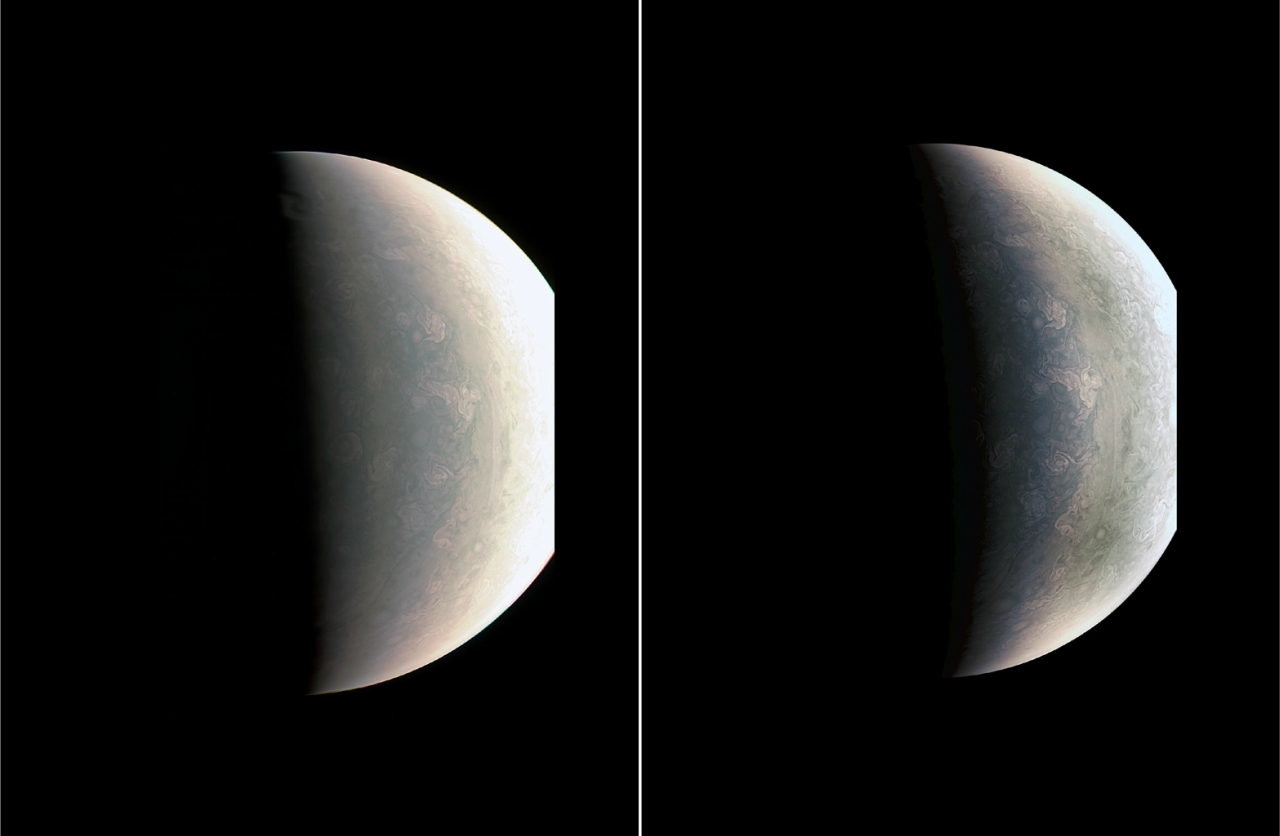 The polar regions of Jupiter from a distance of 78 thousand kilometers.

Not at the poles of the planet and another expected element of the hexagon. The so-called unique hexagon-shaped storm at the North pole of Saturn. 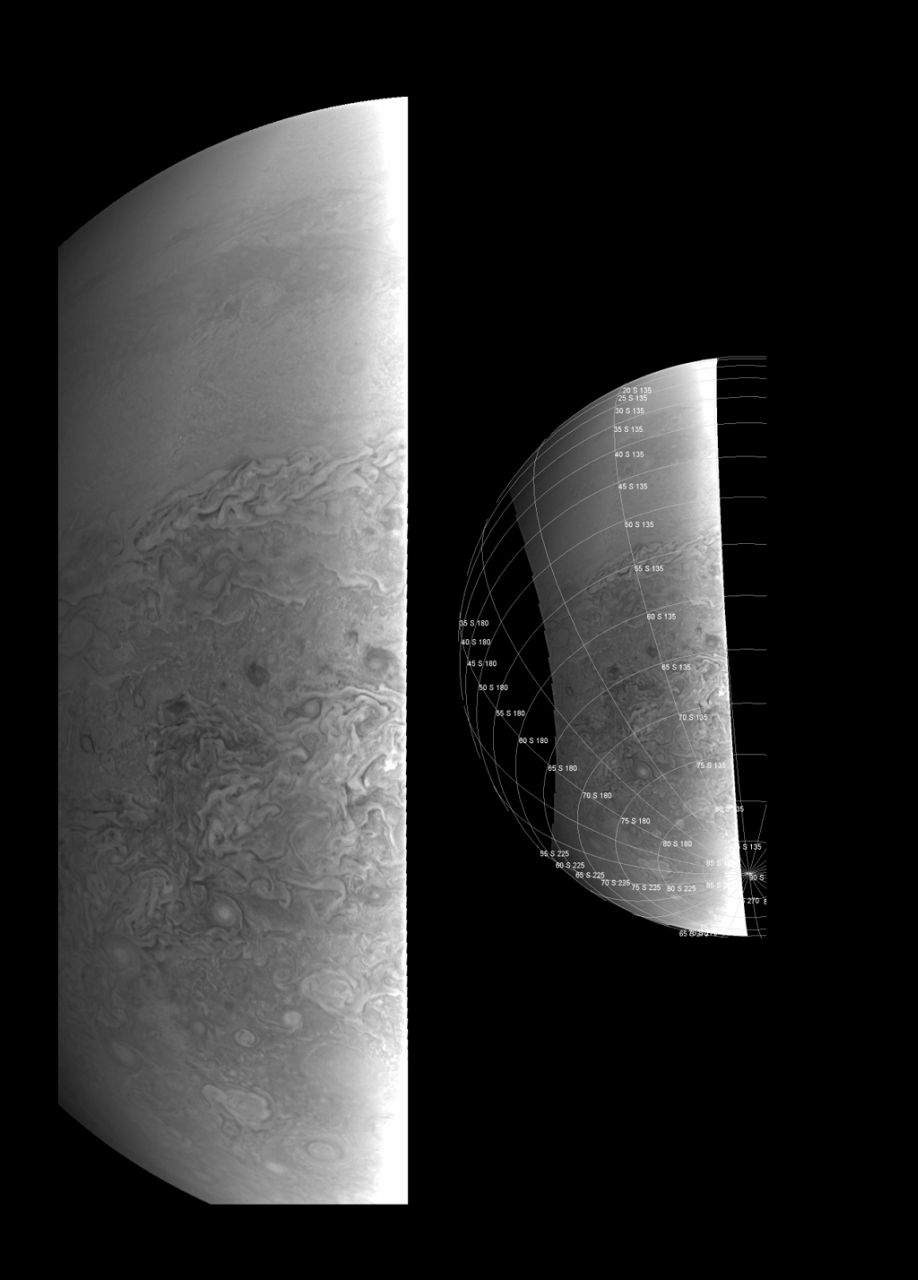 The southern hemisphere of the planet from a distance of 38.6 thousand kilometers.

It was also submitted photos by the infrared spectrometer, JIRAM. He captured in all its glory epic Aurora over the South pole of the gas giant. At least Jupiter was similar to the other planets of the Solar system. 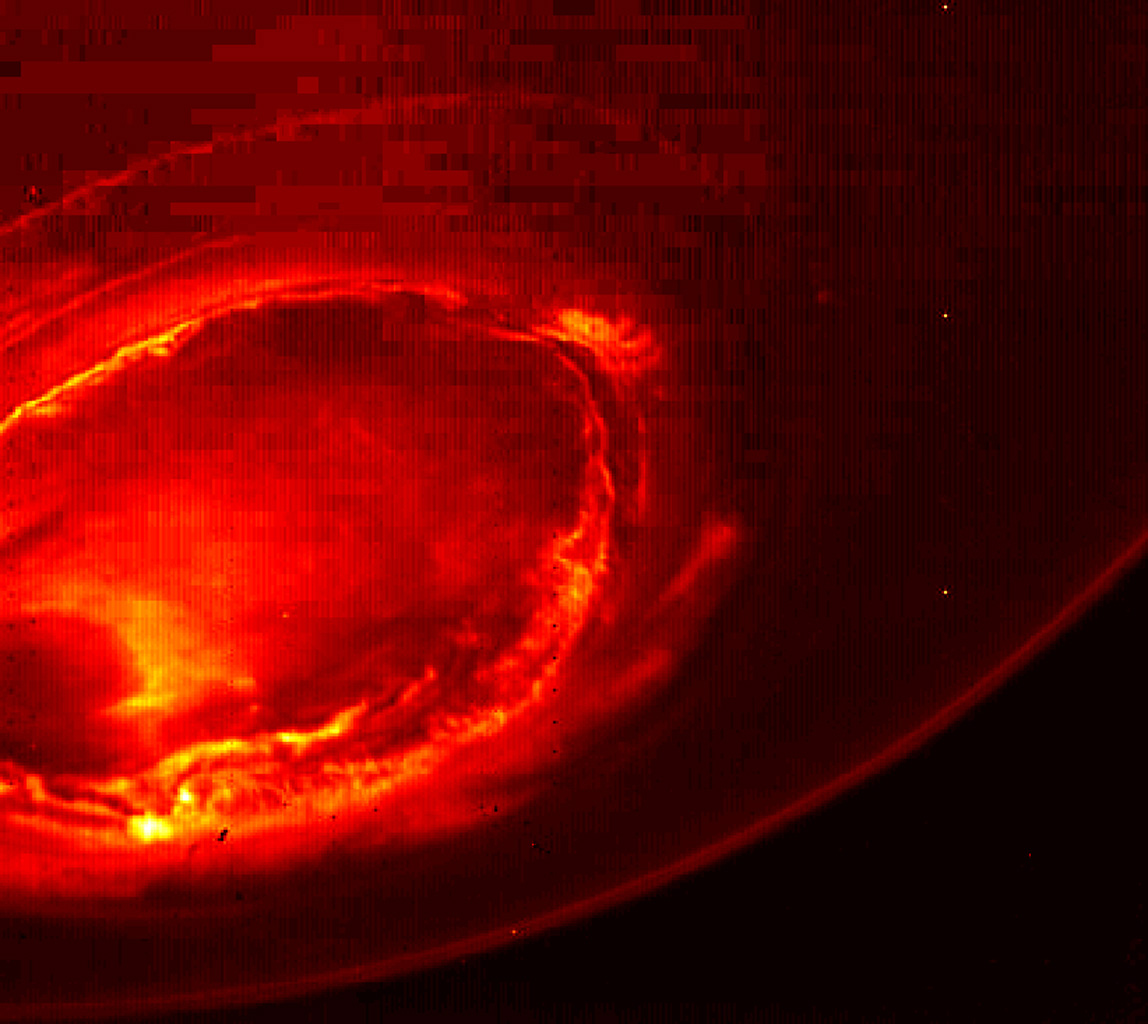 Tools camera recorded the true song of the Aurora of Jupiter. For the first time, radio emission of Jupiter was caught in the middle of last century, but no one has recorded these signals from a small distance.

But great shots of the planet in the IR spectrum. Perfectly shows how differ different regions of Jupiter.