NASA has revealed the plains and highlands of Pluto in color 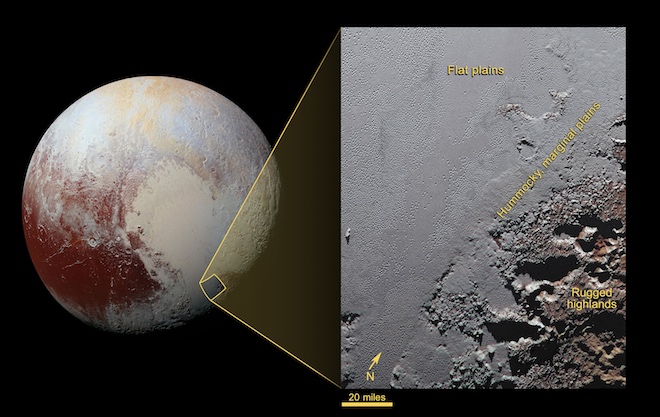 The space research unit “New horizons” allowed NASA to consider in more detail in the color of the South-Eastern part of the large icy plains of Pluto. Promulgated by the Agency at the picture in the lower right corner on the border with the plains can be considered dark highlands, unofficially known as the Macula of the Crane (the Crane in mangeykou religion is the ruler of the underworld, and &#39;macula&#39; denotes a dark spot on the planet’s surface).

Dark red color of the surface of Pluto, scientists believe, give Tolya — a complex molecule that is found only on Pluto, but on the surface many other icy bodies of the Solar system. The macula of the Crane towering over the icy plains of the planet (unofficial name — the plain Satellite) 2.5 kilometers and is dotted with clusters connected by a nearly circular pits, which reach 8 to 13 kilometers in diameter and 2.5 kilometers deep.

On the border with plain Satellite these holes form a deep valley, open at 40 miles long, 20 miles wide and almost 3 kilometers in depth (almost two times deeper than the Grand Canyon in Arizona). The valley floor is covered with nitrogen ice. According to scientists, working with information received from the station “New horizons”, these depressions could be formed as a result of surface subsidence, but the reasons for this subsidence for scientists still a mystery. 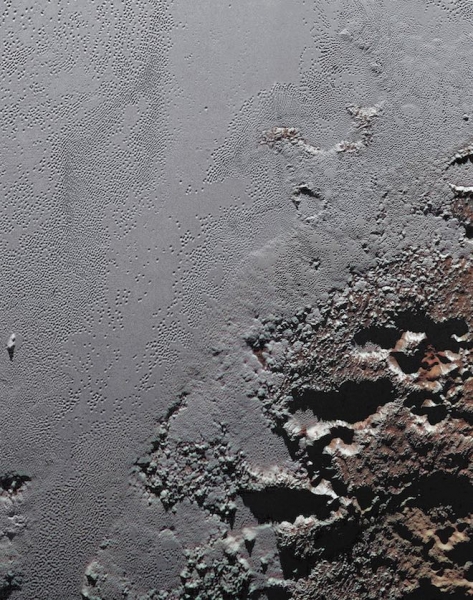 As explained by NASA, released the was created as a result of three separate observations made by the equipment of station “New horizons” in July 2015. The right half of the image is removed with distances of the order of 15.85 kilometers from Pluto with Lorri camera in about 23 minutes before the space station came to the planet at maximum distance. The left half is removed in the same unit for approximately six minutes earlier, from a distance of 24.9 kilometres from Pluto.

These data represent snapshots of the highest accuracy observations of Pluto. The color shot was given due to the data received by the MVIC camera from a distance of 33.9 kilometers from Pluto, about 45 minutes before closest approach.