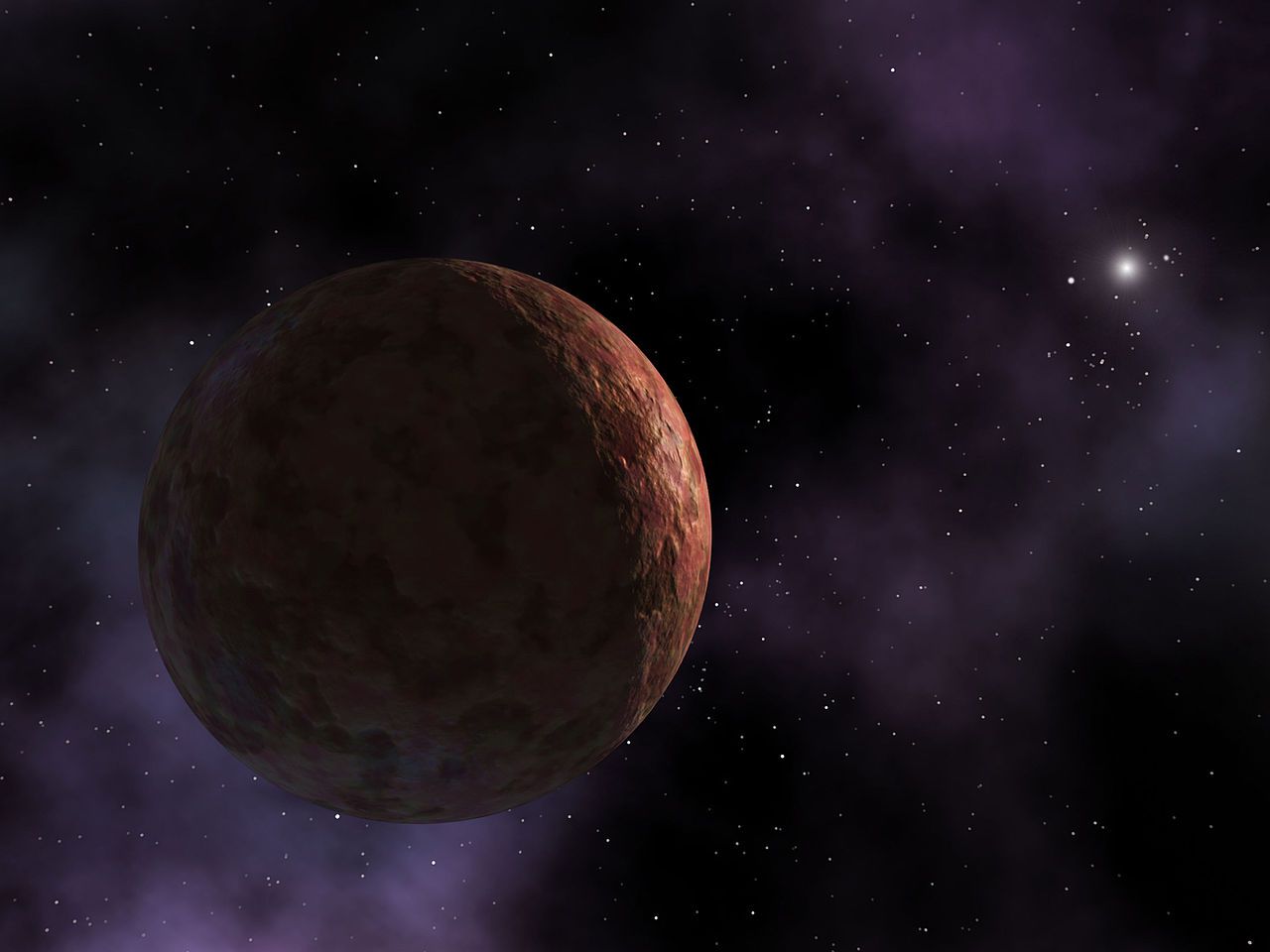 The Transneptune object is approaching the solar system, which will soon disappear from sight for the next 11 thousand years. But in NASA for some reason there are no plans for a mission to it.

In 2003, scientists discovered Sedna – a trans-neptune object, unlike any other. And although larger dwarf planets and comets were already found behind Neptune, which were further away from the Sun, Sedna was unique in how far from the star it was. It was always more than twice as far from the Sun as Neptune, and as far from the star as possible – a distance of about a thousand times more than the Earth. Despite all this, Sedna is quite large – about one thousand kilometers in diameter. This is the first discovered object, supposedly, flew up to us from the Oort cloud. And we will have only two possibilities to send a mission there: in 2033 and 2046. However, NASA does not even consider the possibility of such a trip. If we remain inactive, this chance will slip away.

The solar system does not end simply with gas giants, rocky planets and an asteroid belt. There is the Kuiper Belt, in which there are countless ice bodies of different sizes: from dwarf planets like Pluto and Eris to comets and even smaller objects. Behind him is a scattered disk: bodies that once approached Neptune, but were thrown back to more distant orbits, often located in hundreds of astronomical units from the Sun (1 AU – the distance between the Earth and the Sun). Next are isolated trans-Neptunian objects: bodies that never approach any of the major planets and whose perihelion is larger than any object in the Kuiper Belt and the scattered disk. But beyond all there are objects from the Oort cloud: they are in thousands of AU. from the Sun and denote the edge of the solar system.

The existence of the Oort cloud has not yet been proved, although there are fairly strong theoretical and indirect observational reasons to believe that it is real (for example, comets with long and hyperbolic orbits discovered). In theory, at a distance of about one thousand AU. up to one or two light years from the Sun there should exist a spherically distributed set of bodies formed at the early stages of the formation of the solar system. In 2003, the team, which included Mike Brown, Chad Trujillo and David Rabinovich, opened the first candidate for objects from the Oort-Sedna cloud. The aphelion of Sedna is located at about 900 AU. – one of the most distant known science. The perihelion of the object is no less impressive than 76 au. Sedna never approaches any of the major planets, so that its gravitational effect does not dissipate. 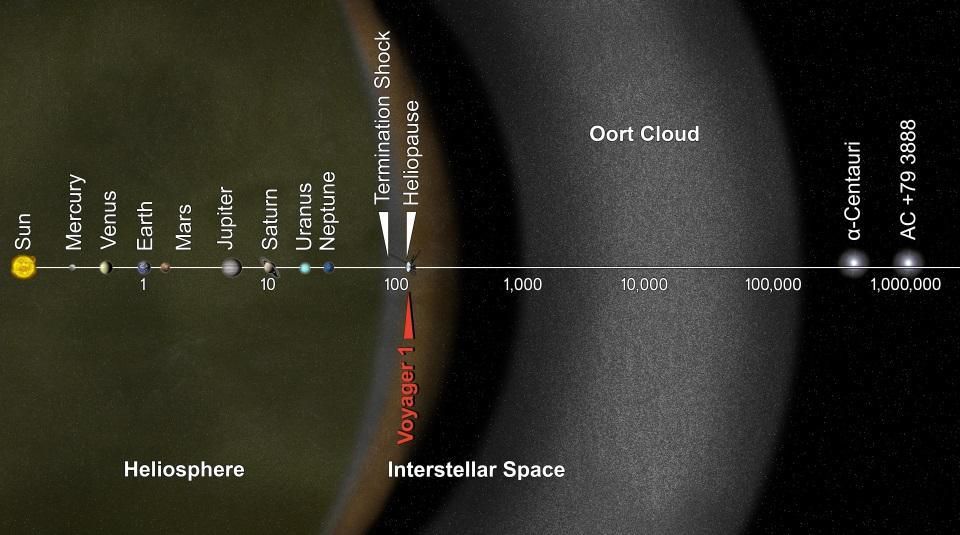 The logarithmic image of the solar system extending up to the nearest star, also illustrating the Kuiper Belt and the Oort Cloud.

So, many speculate that Sedna is one of the first objects known to us from the Oort cloud. In the 15 years that have passed since its discovery, only one gray-haired object was discovered – 2012 VP113 with a perihelion of 80 AU. But the most significant difference between them is the size: with its thousands of kilometers in diameter, it is slightly larger than Ceres’s dwarf planet. Sedna was opened due to its size, brightness and reflective surface properties. At the moment this is the only isolated object detected by direct observation. However, we were able to notice Sedna only because she approached her perihelion.

For complete passage of its orbit around the Sedna Sun, it takes about 11 thousand years – today it is at a distance of about 85 AU. from US. Now it is moving towards the Sun and will reach perihelion in 2075. Given the size, orbital characteristics and origin of Sedna, it is often considered one of the most important open trans-Neptunian objects. And today we have a chance to send a mission to the outer region of the solar system to reach Sedna as it approaches its perihelion. However, given the orbital features of all the planets of the system, we will have only two attempts – and very soon: in 2033 and in 2046. 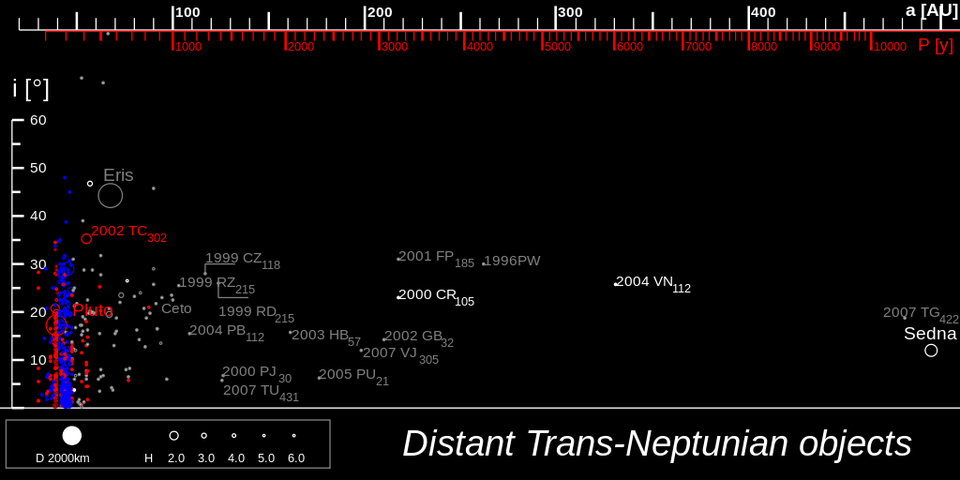 The reasons for the mission are extremely simple. The inevitable approximation of Sedna means that then we will not have the opportunity to study it at such close distance for many thousands of years. And, as mentioned above, NASA does not even have a research mission to Sedna for consideration. At the same time, the most energy-efficient segment along the way to the object will be the gravitational aid of Jupiter: we can use this only if the mission is launched in 2033 or 2046. If we choose one of these windows, we can get to Sedna in 24.5 years. In case of departure in 2033, the mission will arrive at the end of 2057, when the object will be at a distance of 77.27 AU. from the sun. If the launch takes place in 2046, then we will reach Sedna in December 2070, when it will be a little closer – at 76.43 AU. from the sun.

Think about how much we learned during the New Horizons mission: for example, what Pluto looks like, what its geology is and what its atmosphere consists of, its ice, rocks, weather, studied its lunar system, topography – the list can go on for a very long time. It is thanks to New Horizons that we have studied the formation of the solar system and young objects on its outskirts. All this was done with the help of tools developed in the early 2000s. 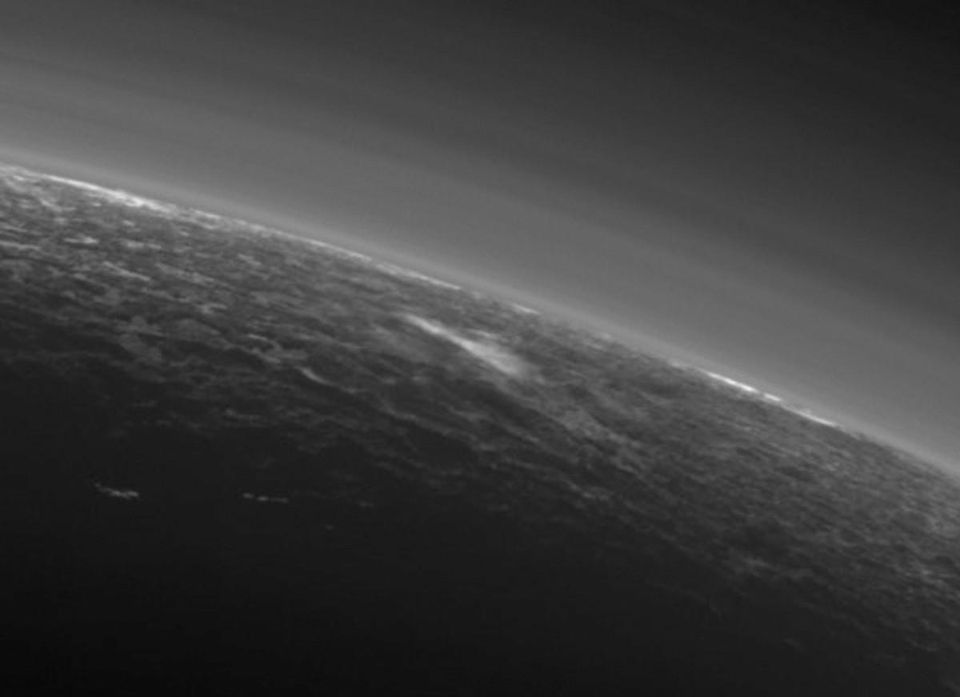 A snapshot of the dark (night) side of Pluto, on which layers of atmospheric haze are visible and, presumably, low-lying clouds are closer to the surface. The technology used to make the photo of Pluto was developed more than ten years ago. (Photo: NASA / JHUAPL / SwRI)

Now imagine that we will receive all this data about an absolutely new class of objects: the bodies that formed far beyond the space in which the protoplanetary disk of the solar system was formed. Imagine what tools we will develop and what scientific questions we will answer if we prepare a mission in the 2020s or 2030s. This is the best opportunity for us – as a species and civilization – to explore one of the most unique objects approaching the Sun for the first time in many thousands of years.

Is there an Oort cloud? Is Sedna very different from the objects formed in the Kuiper Belt, in its composition and geophysical properties? Is it from the Oort cloud? Does she have an atmosphere or companions? Is it rotating and are there elements on it that are necessary for life? Having sent a mission to Sedna, we could get answers to these and many other questions. Any mission requires a lot of time for preparation, planning and implementation – especially such a truly ambitious one. And if we want to go to Sedna already in 2033, it’s time to start planning right now.