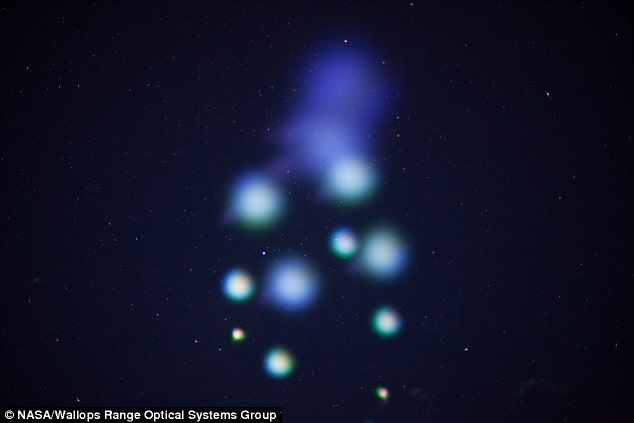 The sky above our heads seems familiar. The movement, size and color of the clouds give an impression of what is happening on the street even before you leave the door. The clouds are such a useful indicator of weather that NASA decided to add several colored clouds to the ionosphere in order to find out what kind of weather reigns there.

And for this, the agency painted the sky in red, blue and a little green.

Using the meteorological rocket Terrier Malamute (improved version), NASA launched 10 canisters the size of a can of soda into the ionosphere at 4:25 am on June 29 at an altitude of 189 km above the cosmodrome Wallops in Virginia. In the air, canisters liberated barium, strontium and copper oxide, and these harmless metals formed red and blue-green clouds in the ionosphere.

Previous attempts to conduct an experiment in June were interrupted due to bad weather conditions and sea ships at the site of a possible landing of the missile.

That’s how the colorful clouds looked.

NASA received nearly two thousand messages and photos of colored clouds or vapor indicators. They were noticed in the north of the country in New York, in the south in South Carolina and in the interior of the mainland – in Virginia, Maryland, Pennsylvania.

What is so interesting about the ionosphere?

The ionosphere is the layer of the atmosphere at an altitude of 60 to 1000 km. Here, the particles absorb the solar radiation and create ionized gases. Neutral gases are also circulating here. They are influenced by the Earth’s own magnetic field, electric fields and solar activity. Other factors play a role – altitude, local time, latitude and time of year.

The purpose of the experiment is to learn more about the gases in the ionosphere, and the models they usually follow. Computer modeling, satellites and ground-based radars are useful for tracking the movements of these gases, but the steam indicators will help create a very accurate flow pattern of their flows. NASA cuts colored clouds with “injecting a small amount of harmless paint into a river or stream to study currents, funnels and other types of movements.”

The activity and behavior of the ionosphere are important for radio communications and GPS satellites, so it makes sense to learn more about this layer of the Earth’s atmosphere.