NASA named the new purpose of the probe New Horizons 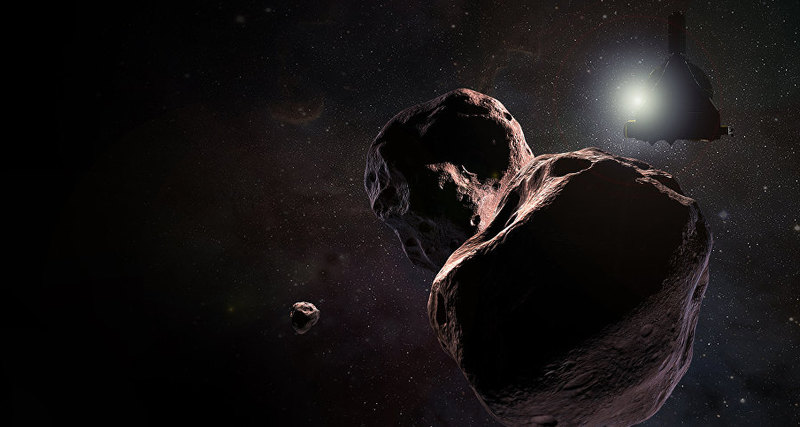 Dwarf planet 2014 MU69, the next target of the probe New Horizons, received a semi-official name – “Ultima Thule”, or simply “Ultima,” the press service of NASA.

“MU69 will become the boundary of the world for mankind, just as this role was played by the mythical island of Thule for the ancient Greeks. Our probe now leaves the boundaries of the worlds of the Solar System that we have already studied, coming closer to the cosmic Thule. Since it will be the most distant object that the spacecraft has ever visited, I like to call it the Ultima, the symbol of the highest progress that NASA has been able to achieve, “said Alan Stern, the mission leader.

The New Horizons probe has now traveled about two-thirds of the way to its next target, the dwarf planet 2014 MU69, which it will reach early next year. Every day the probe flies about 1.1 million kilometers, periodically awakening and receiving new photos of the near-by Kuiper objects and other celestial bodies, as well as observing changes in the composition and properties of the surrounding matter.

Observations of the “shadow” of 2014 MU69, which NASA scientists spent last summer, showed that this heavenly body is a double planet, a pair of relatively large asteroids. Each of them has a diameter of about 15-20 kilometers, which makes them analogues of Deimos and Phobos, the moons of Mars.

The first detailed photographs of this dwarf planet can be obtained this summer, when New Horizons temporarily out of hibernation and check the work of all of its scientific instruments. As scientists hope, these images and data will help them to optimize the program of observations and to understand if the probe threatens the nearest approaches to the 2014 MU69.

This week, Stern and his team summed up the contest, which the New Horizons research team conducted among users of the NASA site and the SETI Institute in November last year. In its framework, the mission members invited the public to participate in the selection of the name for 2014 MU69, sending their versions of its name and their explanations. The best versions and the winner of the contest were to be published in early January of this year.

This idea turned out to be so popular among network users that scientists had to extend the competition for three days, and then study 115,000 applications and 34,000 new names for the 2014 MU69, and choose the 37 most successful ones. Nine of them were proposed by Stern and his colleagues, and 29 by visitors to NASA sites and the SETI Institute.

Ultimately, the convincing victory in these “elections” was won by the island of Tula – this name was offered by just 40 amateurs of astronomy, and it was most like the scientific team of New Horizons. In addition to the mythical “outskirts of the world”, Mount Olympus, the Faro Lighthouse, the Rubicon River, Abeona, the ancient goddess of distant travels, the first man Pangu from Chinese myths and legends, and dessert tiramisu had great chances for victory.

As the scientists note, it is not yet clear what official name 2014 MU69 will get, as long as astronomers are not completely sure whether this world is a single whole or a system of two small dwarf planets. When New Horizons draws closer to him and receives an unambiguous answer to this question, NASA will forward his proposals on behalf of the “forerunner of Pluto” to the International Astronomical Union.