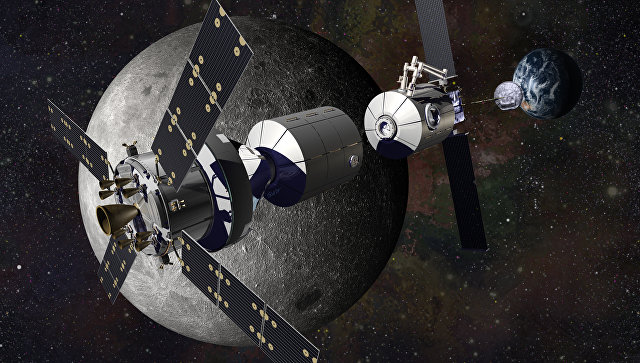 Representatives of NASA and a number of experts from space branch from the Russian Federation, Europe, Japan and Canada have discussed at a private meeting in the agency headquarters in Houston a possibility of construction of constant lunar base in an orbit of the Moon by 2023, reports Planetologichesky society.

“The current idea of this project means construction of the multimodular station, in fact, of the reduced copy of the ISS which will rotate not around Earth, and around the Moon. On him more advanced technologies will be used, than those which have been applied at construction the ISS, including completely autonomous life support systems and ionic engines” — Anatoli Zack, the owner of the Russian SpaceWeb portal and the popular writer of space writes.

Through lunar prairies to Mars

As Zac tells, recently there has taken place the closed meeting of the International group on development of the ISCWG spaceships within which representatives of these five spacefaring nations discuss the international plans for space exploration and volume where the mankind after an ISS conclusion from operation in the middle of 2020 will move.

Current plans of this group mean construction of the lunar space station which will serve as a starting point for farther expeditions to space, including for the piloted flights to asteroids and to Mars. On plans of NASA, this station will be a peculiar test ground for technologies which will be used for a travel and colonization of Mars.

Hinted at existence of similar plans of NASA earlier, however their detailed study was postponed. There were now first details of this project – construction of the station, by current plans of aerospace agency, will begin in 2023, and it will be carried out by means of two tools – the Orion spaceships and the superheavy carrier rockets SLS.

In 2023 NASA plans to send to the Moon several pilotless expeditions within which the Orion ships will take modules of future station which will be gradually assembled in an orbit in a whole into an orbit.

Base with a moon rover and locks

The first to the moon 8,5 ton power unit and engines of future “lunar ISS” which by current plans of NASA will be sent to the Moon during the third research mission of Orion will go. A part of ionic engines of this module, perhaps, will be developed by the European Space Agency having experience of creation of similar accelerating installations. Canada, traditionally, will be responsible for creation of “hand” – the manipulator for completion of the lunar station and unloading of the arriving ships.

Two subsequent missions of Orion, EM-4 and EM-5, will deliver and will connect to the central block of the station its residential modules which on the ISS were created in Russia and in Europe. New versions of these modules will be created this time by Japan which will make them completely autonomous and independent of supply of water and oxygen from Earth.

In turn, Russia on behalf of Roskosmos will develop a key link of the station – the lock module which will be used for extravehicular activity and which will carry with itself(himself) a large number of supplies for the first expedition of the station. It will be started or onboard one of Orionov, or will be delivered to the Moon, but already without supplies, by means of the new Russian carrier rocket “Angara-5”.

In addition to all this, in farther plans of ISCWG there is an idea on construction of 10-ton “dugout boat” for this station which will be able to go down on the surface of the Moon, to collect tests of soil and to return back them on the station. At best this robot will be constructed and sent to “the lunar ISS” only in 2026.

As transfers Planetologichesky community, now “the space five” is very close to the conclusion of the formal agreement on construction of this base. The first phase of its designing can begin next year or in two years. Construction of the station, by current plans of “five”, will shall is complete in 2028.