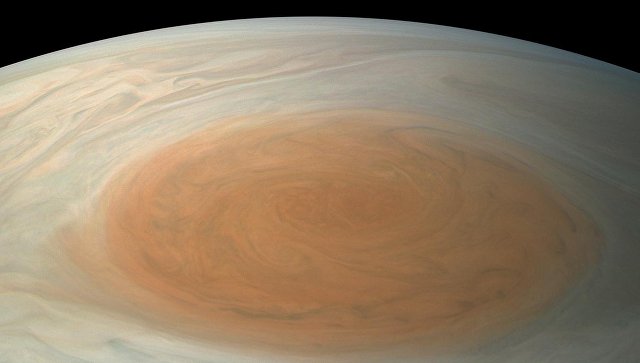 Participants in the Juno mission and “civilian” scientists presented the first detailed pictures of the Great Red Spot of Jupiter, which we can now see if we looked at it with our own eyes. The photo was posted on the NASA website.

Juno probe, flying to Jupiter for five long years since August 2011, in early July of last year approached the giant planet and entered a stable orbit around it. The first two months after the collision the probe spent on reducing the orbit and checking all scientific instruments, and the first scientific data were received only at the end of August.

The verification of all scientific instruments of Juno and the transition to a new orbit that was more observable would have taken place in mid-October 2016, but just before the start of this maneuver, NASA engineers documented engine problems that forced the mission engineers to postpone it to the next rapprochement with Jupiter . Later, Bolton and his colleagues abandoned such plans indefinitely and began to monitor Jupiter from a “high” orbit.

In early July, Juno for the seventh time approached Jupiter and received a series of unique images of the Great Red Spot, the most powerful hurricane-anticyclone in the upper atmosphere of the planet, raging for almost two hundred years.

The dimensions of this spot are estimated not in kilometers, but in the diameters of the Earth – it is about 1.3-3 times wider than our planet, and the temperature difference in its warm and cold points exceeds several hundred degrees. As astronomers believe today, the “big spot” works like a hot water bottle, pumping heat from the bowels of Jupiter into its impossibly hot atmosphere.

The first photos of this spot, which Juno mission members presented to the public two weeks ago, were obtained by the JunoCam camera with the help of special filters that “remove” those parts of the color gamut that are useless for scientists. Therefore, the Great Red Spot and other regions of the surface of Jupiter do not look the same on them, as we would have seen them if they were in the orbit of the giant planet, like the heroes of the film Odyssey 2001.

NASA experts and Bjorn Jonsson, an amateur amateur from Iceland, have spent the last two weeks combining these images and getting a realistic picture of what looks like the Great Spot and Jupiter itself in natural tones.

This photo, as Johnson notes, allows each person to imagine that he is now at an altitude of about 14 thousand kilometers from the surface of Jupiter, circling around him with Juno.