NASA received the latest photos of Titan from “Cassini” 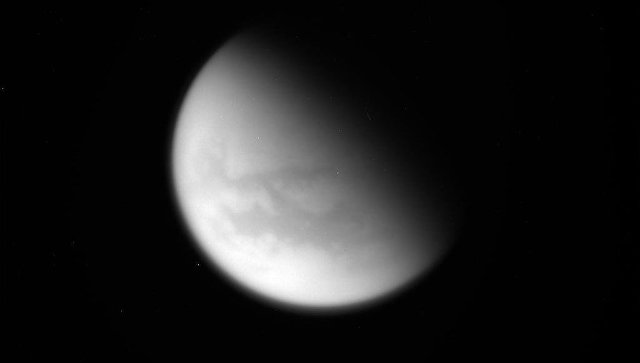 The Cassini probe successfully completed a series of maneuvers that led him to the trajectory of a collision with Saturn, and transmitted to Earth the latest photographs of Titan, the earth-like moon of Saturn, NASA reports.

“The successful completion of this span means that we entered the” Final of the Opera “and can not go back now.” Now the probe is moving along a ballistic trajectory, and even if we tried to adjust its trajectory with the help of shunting engines, we would still be in Saturn’s atmosphere September 15 this year, “said Earl Maize, head of the Cassini mission to NASA.

Last Saturday, “Cassini” officially began the last phase of his life, the last time he met with Titan. The rapprochement with this moon of Saturn helped the probe to change the flight trajectory and enter the collision course with the giant planet, in the atmosphere of which it will burn at the end of September this year, having completed 22 flights through the gap between the rings and their “master.”

On Saturday, “Cassini” flew at a record close distance from the surface of Titan, descending to a height of 979 kilometers from its surface. During this flight, the probe received many new photographs of the planet, including a number of previously unexplored territories, and also enlightened its hydrocarbon lakes and seas with the help of its radars.

Due to the rapprochement with Titan, the speed of the probe increased by about three thousand kilometers per hour, and its orbit was extended and markedly changed. Tomorrow, “Cassini” will begin the first flight through the gap between Saturn and its rings, and will try to use this opportunity to accurately measure the mass of rings and study the properties of space in the immediate vicinity of the giant planet.