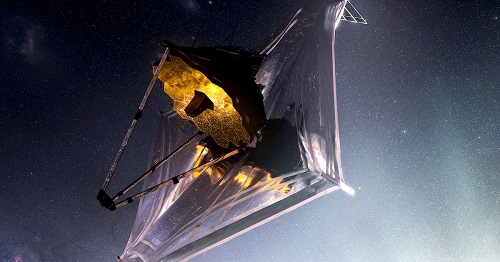 NASA’s James Webb Space Telescope is “fully deployed,” according to the agency’s science administrator, Thomas Zurbuchen, and this is certainly cause for joy after decades of hard work and tens of billions of dollars spent.

But because the space observatory orbits the Sun in a chaotic orbit, it is likely to encounter a lot of space debris in its path — and collisions with it are likely inevitable, according to its team.

“Some small collisions with micrometeorites will definitely happen,” NASA Goddard Space Flight Center scientist Michelle Taller said during a live broadcast over the weekend. “The telescope’s mirrors will be damaged over the course of the mission.”

The telescope itself is indeed vulnerable, but the team says it will likely survive some damage.

“Suppose it gets hit by debris,” said Julie Van Kampen, a NASA engineer. “It’s happened before with other space telescopes and we had a similar problem then – the mirror broke.”

As for protection, it is “virtually non-existent,” she explained.

However, according to Van Kampen, if a micrometeor had punched a hole in the telescope’s solar shield, there are at least four more layers to hold the shield together.

“That was part of our lifetime calculations,” she added.

However, there may be problems for the JWST team on the ground because there is no way to personally maintain the observatory. It’s not like NASA’s Hubble Space Telescope, which the agency’s space shuttle visited five times between 1993 and 2009 for repairs and upgrades.

But there is one crucial difference: Hubble operated in a much more cluttered low-Earth orbit. JWST will orbit the Sun at L2 (Lagrangian Point 2), a much more distant location that will allow it to form a straight line with the Earth and the Sun.

“It’s actually a very good location,” Thaller explained during the talk, adding that it’s “a cleaner place when it comes to space debris.”

Fortunately, the engineers have thought ahead and made some extra provisions. The telescope’s mirrors, for example, are designed to withstand some damage without stopping scientific research.

NASA has set an ambitious goal for JWST to last at least ten years, and this figure is limited primarily by the amount of fuel the telescope needs to maintain orbit and operate its instruments.

At this point, engineers have accomplished a huge feat by deploying the telescope, a complex process involving hundreds of steps.

But space debris and meteorites will always pose a threat – even when extra precautions are taken.