NASA showed a cluster of hypergigants 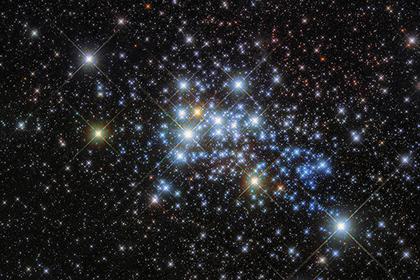 NASA published a snapshot of the star cluster Westerlund 1, remote from Earth at a distance of 15 thousand light years. The cluster consists of hyper-giants – the stars of a huge mass and sizes that are rare in the Milky Way. The photo was taken with the help of the Hubble Space Telescope.

Westerlund 1 was investigated in 2002-2005. Astrophysicists conducted spectrographic and photometric observations of the cluster, during which the spectral type of stars was determined, the surface temperature and luminosity were measured. It was found that it includes hypergigants. One of the stars – the red Westerlund 1-26 – 1500 times the size of the Sun, its diameter is comparable to the diameter of the orbit of Jupiter.

According to astronomical measures, the cluster is quite young, its age is about three million years. The components of its star formed at about the same time and have the same chemical composition.

Clusters call a gravitationally bound group of stars that have a common origin and move in the gravitational field of the galaxy as a whole.