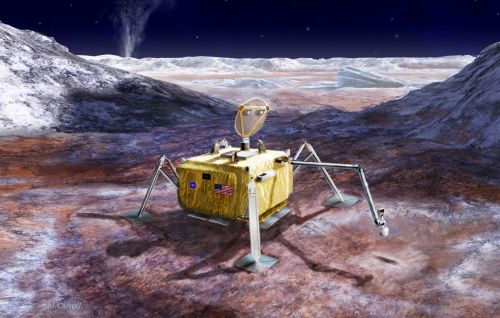 On the official website of NASA, there were images and a detailed description of the spacecraft is the descent module, we need to study Europe. However, this is only the first prototype: it is possible, the end face of the lender changes.

The lander plan to send to the moons of Jupiter in the framework of the mission Europa Clipper (unofficial name). As the probable date of launch of the lander module called the mid 2020-ies. The main objective of the mission is the study of Europe for its ability to support life. Among the main objectives is the confirmation of the thesis about the existence of the satellite under-ice ocean. Specifically, the task of descent of the probe is sampling from the surface of Europe. This will allow scientists to answer many questions related to the Jupiter.

The engineers have worked for many associated with spokeman device aspects. In particular, the researchers introduced the option of landing on the moon’s surface without the use of parachutes. To reduce module and its touch with the surface you want to apply the powerful engines that would use a special algorithm of work. The latter will allow to avoid contamination of the landing site emissions from engines.

If in the case of spokeman apparatus are still a lot of uncertainties and unresolved issues, the fate of the interplanetary automatic stations causes less anxiety. This unit will be in orbit and transmit to Earth the important data. NASA, in particular, has selected nine scientific instruments that will be installed on an automatic station.

Europe is the sixth moon of Jupiter – the largest planet in our system. In size it is inferior to the moon. It is assumed that the center of Europe is the iron core.