NASA showed a video of the journey to Pluto 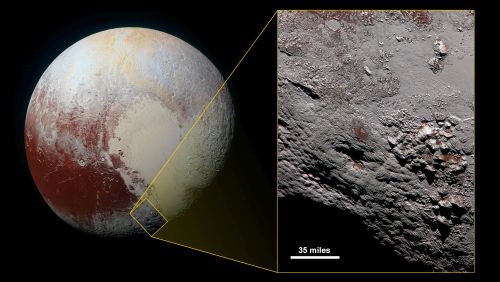 In honor of the two-year anniversary of the mission “New Horizons”, which explores the dwarf planet Pluto, the specialists of the American Space Agency NASA mounted two new videos of the demonstration flight of the space probe around the Pluto system.

Both videos, created on the basis of numerous photographs of a dwarf planet and its natural satellites, were made public for the general public on Friday, July 14.

Both videos help the viewer to go in absentia aboard the New Horizons station and make a fantastic trip through the Pluto system.

One of the videos presented is focused directly on Pluto itself, starting with its rocky mountainous terrain to the southwest of the 1,000-kilometer plain filled with dry ice. It is, of course, the famous “heart of Pluto.” Officially this area is called Sputnik Planitia.

Another video focuses the audience on the largest satellite of Pluto – Charon. Charon surpasses in size and weight all the other four moons of a dwarf planet.

On Charon you can see a huge canyon called Serenity Chasma, which is about 1,600 kilometers long.

The videos are perfect, but if the audience were indeed on board the automatic interplanetary station New Horizons, they would see Pluto somewhat differently. The thing is that the video has been specially zoomed so that we can view in more detail all the features of the dwarf planet, Charon and his other satellites.