NASA showed an image that combines space and time 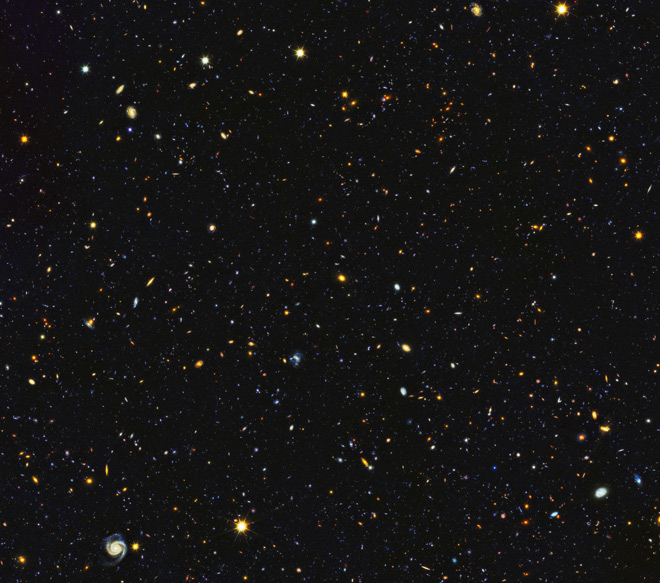 The last NASA photograph, which includes 15,000 galaxies, is one of the most informative for today, because space and time have come together here. The new epic image, made with the help of the Hubble Space Telescope, is dominated by the emerging stars.

To make such a photo is not easy – NASA used the ultraviolet Hubble camera, combining data from infrared and visible spectra. Together they formed one of the most complete representations about the Universe for today – this simply can not be seen with the naked eye. Why? Different galactic epochs are represented by different types of light. The most distant galaxies are visible only in the infrared spectrum. Meanwhile, closer galaxies can be seen in a wider spectrum. The Earth’s atmosphere filters out most of the ultraviolet light, and so the Hubble, which is located in space, is needed to obtain a comprehensive review.

The result is an image that literally goes beyond time and space. It is believed that the age of the oldest stars in photography is 11 billion years, about 3 billion years after the Big Bang and the creation of that universe, as we know it. Approximately 12,000 stars in the picture are in the process of formation.

NASA explains that by comparing images of star formation in a distant and nearby universe, astronomers better understand how nearby galaxies grew out of small groups of hot young stars. This mosaic image is 14 times larger than the famous Hubble Ultra-Deep Field (HUDF) image, compiled from data obtained by Hubble from September 2003 to January 2004.