NASA showed images of Pluto with a higher resolution 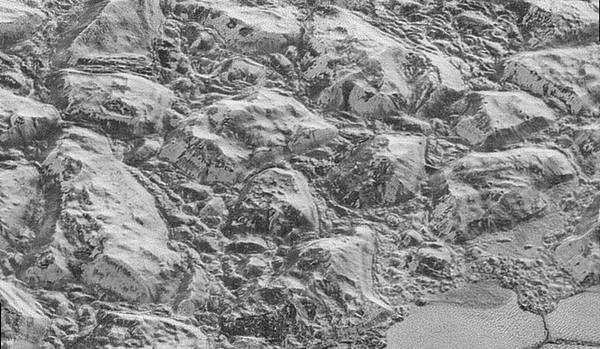 NASA showed images of Pluto with a higher resolution. New video with the image of the surface of Pluto is posted in the Internet space Agency NASA. He prepared from photographs with the highest resolution of 80 meters per pixel. Pictures made interplanetary station “New horizons”.

They show a narrow strip of territory extending diagonally across the two hemispheres. Its width ranges from 90 to 75 kilometers.

The photos show how the landscape of Pluto. First there are the craters, then they are replaced by mountain ranges, and then the surface structure takes on an unusual shape. The researchers compared them with a washboard. In addition, it is seen that plain as though divided into cells of irregular shape. Experts examined the images on the large ice floes and dark mountainous terrain, rugged valleys.

In NASA believe that these photos will allow to study the surface of Pluto more details. Also, professionals will be easier to understand what processes occurred during its formation.

The new images were so impressed by the scientific head of the mission “New horizons” that he was eager to send another space probe to Pluto and to a similar image over its entire surface.

Interplanetary station “New horizons” is designed to study Pluto and its satellite Charon. It started in January 2006. In mid-July last year, the probe is nearing Pluto and flew twelve-and-a-half thousand kilometers from its surface. In total, the unit collected information on planet 9 days. The volume was very large, and sending the data to Earth will be completed only by the beginning of next year.