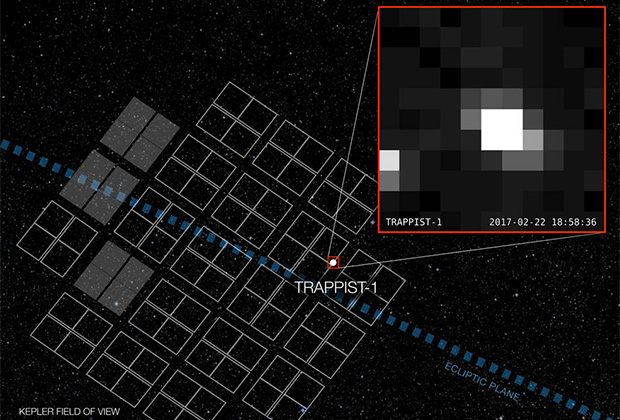 NASA first showed the images and animation of the TRAPPIST-1 system, which consists of at least seven exoplanets the size of the Earth, three of which can be livable. This is reported on the agency’s website.

On the animation presented by NASA, you can see the changes in the illumination of a 11 by 11 pixel matrix belonging to the Kepler space telescope camera. The video is mounted from 60 pictures taken during the hour on February 22, 2017.

In the center of the animation, a red dwarf TRAPPIST-1 is visible, while the presence of exoplanets around it is monitored by changing the brightness of individual pixels. Fluctuations of illumination in this case make about one percent and are estimated by special methods.

Star TRAPPIST-1 is at a distance of 39.5 light years from the Sun in the constellation of Aquarius. On the surface of three of the seven exoplanets revolving around the light, there may be water in the liquid state.