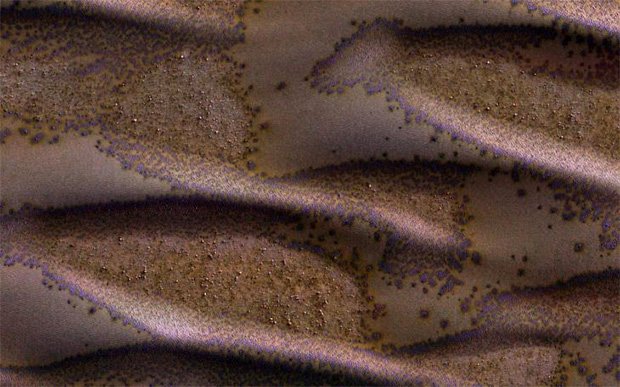 NASA shared with the public with new images, which show the active evaporating under the influence of carbonic acid stones on Mars. This process, which occurs on the southern hemisphere of the planet, means the completion of winter.

Huge boulders are located in a desert area covered with sand dunes. The stones entering into the process of sublimation (transition of matter from solid to gas, bypassing the liquid), are under constant influence not only carbon dioxide but also sunlight.

Notice the characteristic sublimation characteristics, if the analysis of dark spots on photographs. The image was able to do with the help of the HiRISE instrument, which is located at a research station MRO (Mars Reconnaissance Orbiter).

At this point in the orbit of the red planet is already five stations. Three of them are American. The first appeared there in 2001. We are talking about the Mars Odyssey. The above mentioned MRO in 2006. The last of us is MAVEN. In orbit of Mars, she appeared in 2014.

Active on the surface of Mars also conduct two Opportunity Rover and Curiosity. The first of these is an absolute record for the duration of the work, as it is the red planet since 2004.