NASA told what will be the “nuclear” probe New Frontiers 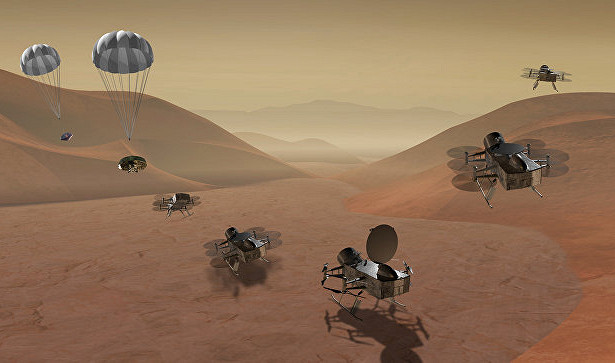 The next probe from NASA from the New Frontiers program can return the first samples of matter from the comet Churyumov-Gerasimenko or try to find traces of life and estimate the likelihood of its occurrence on Titan, Saturn’s satellite, scientists said at a press briefing of NASA in Washington.
“Titan is a unique planet with a dense atmosphere, lakes, seas from hydrocarbons, a complex climate and a cycle of substances.” We would like to continue the work of Cassini and Huygens and see if there are all the “life blocks” on its surface and whether life can “Unlike other landing modules, our dragonfly will be able to fly from place to place, moving hundreds of kilometers,” says Elizabeth Turtle, head of the DragonFly mission.

Such a lender, if he wins the competition, will become extremely unusual and a new project for NASA. Unlike all other missions of this kind, such as the landing platform “Phoenix”, “Huygens”, InSight and a lot of Soviet Venus stations, DragonFly will be able to move from place to place thanks to two innovations.

The first of these is a nuclear power plant that can supply energy to the lander for many years. The second is a set of eight powerful propellers capable of lifting a heavy probe into the tight air of Titan. This makes the DragonFly very similar to the helicopter or the drones, except that it is adapted to work in much more severe conditions.

Thanks to a powerful power plant, the data from DragonFly, as noted by Turtle, will be transmitted directly to Earth. The very “nuclear dragonfly” will be equipped with four blocks of scientific instruments intended for comprehensive study of Titan.

In addition to the “standard” spectrometer designed to study the chemical composition of the atmosphere and the upper layers of Titan’s soil, DragonFly will install a drill, soil analyzers, a gamma and neutron spectrometer capable of acquiring data on the structure of the depths of Titan at a depth of several meters, meteorological sensors and a seismometer.

As Turtle expects, in the event of final approval and mission launch in mid-2025, DragonFly will arrive at Titan in 2034 and work on its surface for several years.

In the footsteps of the “Soviet” comet

The second mission, which could be the first project in the new phase of the New Horizons program, could be the CAESAR probe, the first NASA device that will take samples of organic and volatile substances from the surface of the comet and return to Earth.

“Comets can be called the most important, but at the same time least studied objects of the solar system, they contain the substances from which our planet was” molded, “and they were the main suppliers of organic matter for the Earth.What distinguishes comets from other bodies of the solar system “Their subsoil still contains the volatile substances that were present in the solar system at the time of its birth,” said Steve Squyres, CAESAR project manager.

This mission, as noted by Jim Green, the head of NASA’s planetary branch, will be sent to a well-studied comet, in the vicinity of which another probe has already visited, the European mission of Rosetta. We are talking about the comet 67R, opened in 1969 by Klim Churyumov and Svetlana Gerasimenko.

So the artist presented himself a probe CAESAR, which can fly to the comet Churyumov-Gerasimenko

Such a decision, according to representatives of NASA, will allow the killing of three birds with one stone: it will make the mission cheaper, make it safer and accelerate its launch. As the Squires pointed out, another similar technique would be the installation of a capsule for the collection and return of soil to Earth, which was developed by the Japanese space agency for the probe Hayabusa.

“The reason for this, in fact, is very simple – we need a capsule that would keep the volatile substances from the comet frozen in the course of the flight, up to the touch of the Earth’s surface.” The capsule from Hayabusa has a special thermal shield that prevents its warming up to several hundred degrees Celsius, what would happen with the use of our technology, “the scientist explained.

According to the current plans of NASA, CAESAR will be equipped with an ionic engine and it will reach the comet Churyumov-Gerasimenko relatively quickly. Samples of its matter, as the Squires hope, will return to Earth in 2038.

The New Frontiers program was launched by NASA in the early 2000s with the goal of creating a series of probes of the “average” price category, designed specifically to study distant planets and other objects on the distant approaches of the solar system. Its ancestor was the probe New Horizons, successfully launched in January 2006 and reached Pluto in July 2015. It was followed by Juno and OSIRIS-REx probes sent into space in August 2011 and in September 2016.

Typically, a typical “price tag” of such a mission is about 800 million – billion US dollars, which is about twice the cost of “light” missions within the Discovery program, and 2-4 times less than the budget of “flagship” automatic stations and space telescopes NASA.

Such a budget allows you to install a fairly extensive set of instruments and long-lived radioisotope power sources on the probes, but these probes are still inferior to such flagships as Cassini, Galileo and Voyager.

Unlike projects of the Discovery class, when announcing a contest for a new mission of the New Frontiers class, NASA announces a specific list of tasks that such a probe will solve, and does not accept other proposals. This year, they included projects on the return of samples of matter from comets and from the southern pole of the moon, a mission to study the water moons of Saturn, the “Lord of the Rings”, Trojan asteroids and Venus.

In total, by May of this year, NASA received 12 proposals from scientists, and in September of this year Green hinted that the projects connected with Saturn and his moons “orphaned” after the tragic death of “Cassini” in the atmosphere have a very serious chance of winning the giant planet. 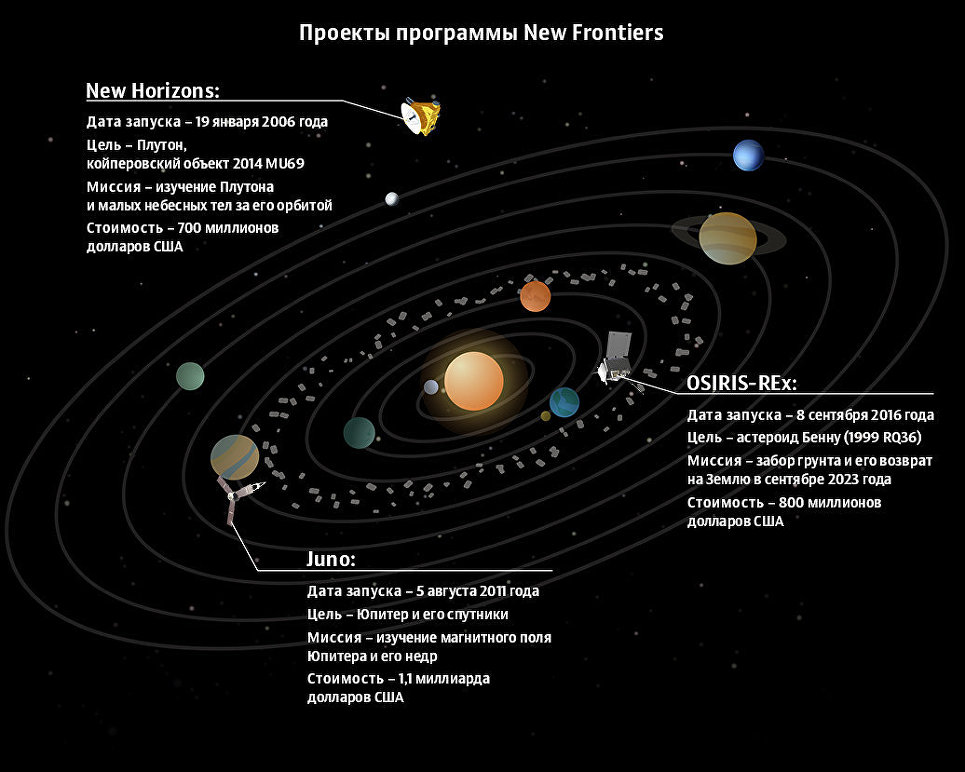 This prediction was half fulfilled – the mission to Titan really was among the winners, but the project to study Enceladus, ELSAH, was only among the “promising” ideas, whose technology NASA will actively develop in the future. The company he will make a Venusian probe VICI, from the creation of which NASA refused, according to Green, due to too harsh conditions on the surface of Venus.

At this competition between DragonFly and CAESAR does not stop – as Green noted, only one mission will be chosen for the first stage of the program implementation and sending to space no later than 2025.

“This is the most difficult program for mission leaders in terms of winning the competition – we only run two such missions every 10 years.Today we have selected two dozen missions that will participate in the selection further.They will have a year to work out a detailed mission plan and submit it by January 2018, and in July 2019 one of them will be selected for launch in the middle of the next decade, “- said a representative of NASA.

As Thomas Zurbuchen, one of the heads of the NASA science department, noted, the agency has not yet decided which missiles will be used to launch this or that mission. At the same time, he is confident that by the time the development of these probes begins, a heavy SLS carrier rocket and private space “heavyweights” will be ready to launch a new generation of US interplanetary probes.