NASA wants to recreate the atmosphere on Mars 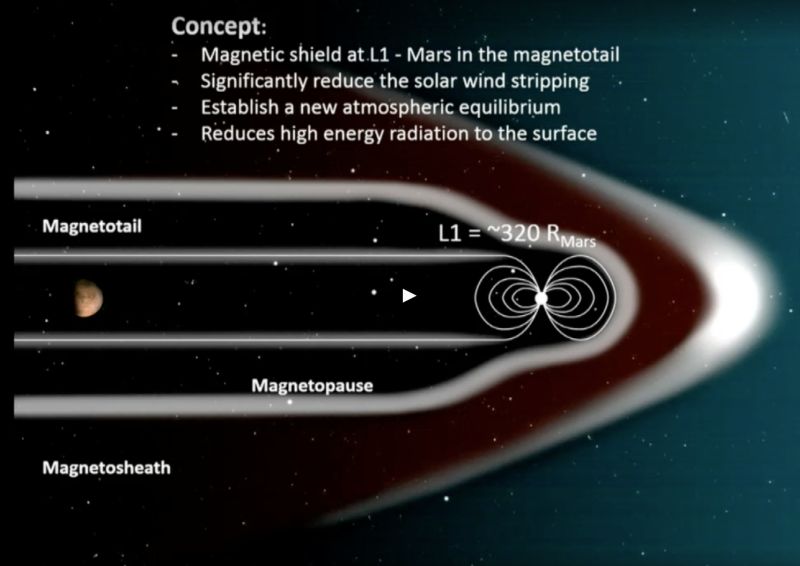 In the headquarters of NASA in Washington hosted a conference for The Planetary Science Vision 2050 Workshop for discussion of global space projects that can be implemented or at least started by the year 2050. One such project was the possible re-creation of the Martian atmosphere.

Jim green, Director of the research Department, NASA, the report entitled “a New Martian environment for science and research” has suggested the following idea: to run a “magnetic shield” called Mars L1 stable orbit between Mars and the Sun, which would protect the planet from high-energy solar particles. The shield will consist of a large dipole or a pair of equal and oppositely charged magnets to create artificial magnetic fields.

Such a shield may ensure that Mars is relatively protected by the magnetic loop by the magnetic field created by the object, allowing the planet to slowly recover its atmosphere. About 90% of the Martian atmosphere was carried away by the solar particles, and it is, according to the latest data, had a fairly reasonable atmosphere and water on the surface about 3.5 billion years ago.

According to simulation models, the shield can help Mars to reach atmospheric pressure, equal to half of the earth’s indicators, in a few years. With protection from the solar wind and the frozen CO2 at the Martian poles will gradually begin to turn into gas from solid state. The greenhouse effect will fill the thin Martian atmosphere and heats the planet, mostly at the equator, after which huge reserves of ice under the poles begins to melt and fill the planet with liquid water.

“Thus, about one-seventh of the ancient ocean may return to Mars,” says green.