NASA will fill and repair satellites by means of the drone 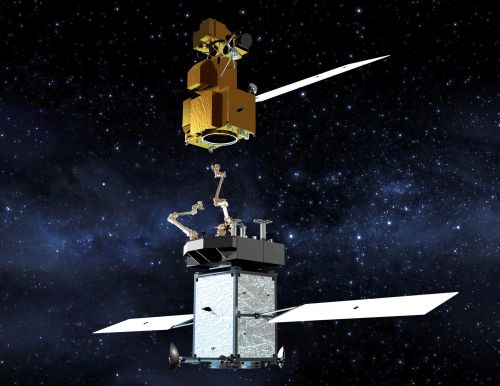 NASA decided to get rid of a situation in which the expensive orbital equipment turns into a useless piece of stuff because of a small malfunction once and for all. Obligations of space repair and refill will lay down on shoulders of Restore-L, the satellite drone with long manipulators.

What will be done by the companion when at it fuel suddenly reaches a limit or for some reason solar batteries will fail? Now — anything. Now space agencies have no reliable method to perform physical repair of objects in an orbit, and it means that the multimillion companion can go to a scrap because of some absolutely trifling malfunction. However NASA decided to find a way out of this situation. This week the space agency declared that it reserves $127 million for financing of the program for implementation of repair and gas station of orbital companions.

The Restore-L project is developed by the Space Systems Loral company which office is based in Palo Alto, the State of California. The satellite drone will possess autonomous navigation, dexterous hands manipulators, robotic tools for different elimination of breakdowns and a tank of rocket fuel which can fill the spacecrafts which exhausted a fuel inventory. By estimates of the company, Restore-L will be able to start accomplishment of obligations in 2020. Refill of Landsat-7 which provides satellite pictures for United States Geological Survey will be its first mission most likely.

In addition to servicing of satellites which otherwise would be lost NASA considers that Restore-L can lay a way for space stations of refill and the production centers. It can also help to clean space debris which threatens operation of other spacecrafts in an orbit.