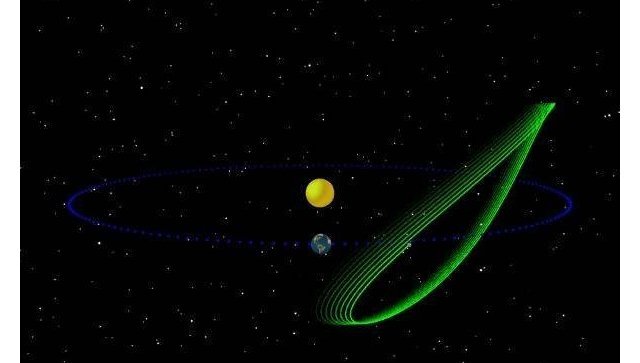 The probe OSIRIS-REx will look for the so-called “Trojan asteroids”, almost invisible satellites of Earth, throughout all two-year travel to an asteroid to Benn, Dante Lauretta, the mission manager declared.

“Search of near-earth Trojan asteroids will become big plus for our mission. We not only will get chance to open new members of this small asteroid “family”, but that the most important, we will work those techniques and critical phases of a mission which we should perform during rapprochement with Benn that will reduce chances of unsuccessful completion of this procedure” — Lauretta declared.

In the 18th century scientists established that small celestial bodies can move on one orbit with the planet if they are near points ahead or behind it where gravitation of the Sun and the planet is counterbalanced.

Thousands of such objects, or “Trojan asteroids”, were for a long time found in orbits of Jupiter, Mars and Neptune, however until recently scientific it wasn’t possible to find any such asteroid at Earth. As researchers tell, it is very heavy to look for the “Trojan” satellites of Earth as they are very close to the Sun if to look at them from the surface of our planet.

OSIRIS-REx removed in space at the beginning of September will spend two next years, traveling around very extended and long trajectory to an asteroid to Benn, one of the most dangerous objects in the Solar system for life on Earth. On the way the probe of NASA will move, figuratively speaking parallel to Earth that pushed Lauretta and his command for a thought to spend this time, watching possible “Trojans”.

In September, 2016 NASA successfully put to Earth orbit the probe OSIRIS-REx which main goal – rapprochement and an intake of soil from an asteroid surface to Benn (1999 RQ36). By current plans of the agency, the probe will approach an asteroid in 2018, will take away soil in 2019, and will start the capsule with at least 60 grams of asteroid matter in the direction of Earth which will make landing to the territories of the State of Utah at the end of September, 2023.

Since February, 2017, OSIRIS-REx will turn on cameras and for several weeks will track neighborhoods of Earth, trying to find the asteroids moving on the Trojan orbits there. These observations will help scientists to be prepared for arrival to Benn in 2018 and to check operation of all algorithms and techniques by means of which the scientific OSIRIS-REx command will select a convergence path with an asteroid and descent to its surface.